For a long time I have been wanting to write a series of posts on the astonishing and virtually unknown Gospel of Barnabas. As is so frequent in early Christian studies, there is a reason for this seminal gospel’s obscurity—suppression. The enormously long, quite elaborate, and emphatically ‘Christian’ gospel came to my attention some five years ago. Though GBar has existed in two versions and in two languages (Italian and Spanish) since the Renaissance, it’s obscurity—half a millennium later—is still virtually total. Have you heard of it? 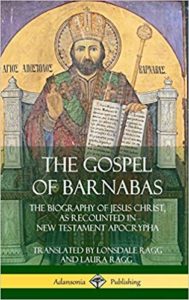 This is the introductory post to a series of what I imagine will extend to 20+ posts. My aim is not to give an extended assessment, or even description, of GBar. I will be narrowly focussed on setting forth and tallying the new sayings and parables in GBar that in my estimation are authentic, i.e., that very probably go back to Jesus, the founding prophet behind Christianity.

“But aren’t you a Jesus mythicist?” you may be wondering. Indeed, I am a Jesus mythicist—in the sense that Jesus of Nazareth did not exist. Longtime readers of this blog and those who have read my books (especially the final chapter of NazarethGate), however, know that my position is somewhat more nuanced. Though I reject the historicity of Jesus of Nazareth, I assert the relevance of another prophet (whose historicity is denied by no one) also called ‘Jesus.’ This prophet lived in early I BCE and is known to Jewish rabbinical writings as Yeshu (= Jesus) ha-Notsri (= the Nazarene). This Jesus was crucified c. 66 BCE, shortly after the reign of Salome Alexandra (r. 76–67 BCE).

If my estimation is correct, the sayings that follow in this series are vital information for every researcher into early Christian origins. I may publish these posts eventually in book form but want to make sure that the material becomes public at least to those who follow my work. This project is, I believe, my last unfinished major undertaking in the field of early Christian studies.

Let me set forth my views on GBar in a nutshell: I consider the core of the gospel to be very ancient (something vehemently denied by mainline Christian scholarship, but equally vociferously asserted by mainline Muslim scholarship). I date its Urtext to I CE, approximately the same dating I assign to the Gospel of Thomas. I consider both these gospels to be our earliest surviving written witnesses to the sayings of Jesus/Yeshu, and that both these gospels predate the canonical tradition, which I confidently date to II CE. While the Gospel of Thomas reflects a proto-gnostic view of Jesus, the Gospel of Barnabas reflects an early Jewish Christian view of Jesus.

Furthermore, I strongly suspect that the Gospel of Barnabas, in its earliest version, was none other than the fabled and ‘lost’ Hebrew Gospel of Matthew first alluded to by Papias in the second century CE, and then by Origen, Irenaeus, and Jerome. (See, e.g., my brief comment to entry No. 26.)

Finally, I also believe that the Gospel of Barnabas—again, in a much-abbreviated urtext— was the template that the evangelist Mark used to fashion his gospel towards the middle of II CE. That the Gospel of Barnabas has little resemblance to our canonical gospels is a non-problem that need not detain us. It simply suggests to me that GBar, as it now stands, is much encrusted with later additions (and thus must be greatly winnowed to reach the early ‘core’), and also that the first orthodox evangelist (“Mark” or “Matthew” depending on your view regarding the Synoptic Problem) radically altered the GBar urtext, so that the rewritten texts GMk/GMt and GBar bear little resemblance.

That a lost Christian gospel was somehow connected to the early canonical gospel tradition is suggested by several clues. First of all, a “Gospel according to Barnabas” is mentioned in two important Christian lists of apocryphal works: the Latin Decretum Gelasianum (6th century), and a 7th-century Greek List of the Sixty Books. Secondly, and more tangentially, the Islamic faith knows an enduring tradition that this precise work, the Gospel of Barnabas, transmits a suppressed apostolic original, one that challenges the divinity of Jesus and is in line with the Islamic view. We have seen on this website that the divinity of Jesus was, in fact, a relatively late Catholic development of II CE—what I have termed Stage 3 christology. In the first century, Christians knew only a spiritual Jesus that indwells the saints (Stage 2). The Gospel of Barnabas portrays a man, Jesus, who is indwelled by the Holy Spirit. Its Jesus fits in perfectly with a version of the religion that is prior to the New Testament gospels and also prior to what became orthodox Christianity. Along these lines, certain scholars have shown that GBar contains Gnostic, Diatessaronic, and (especially) Ebionite elements—all compatible with a pre-faith/pre-Catholic stratum.

As of this writing, the text of the gospel, in English translation, is online via the WayBack Machine. We owe it’s web presence to the labors of Dr. Rod Blackhirst, an Australian scholar and one of the very few who has studied and published on GBar. (Incidentally, Blackhirst does not ascribe to the early GBar thesis. He also espouses the Atwill theory of the Flavian origins of Christianity.)

A lightning rod through the centuries

Upon first perusing the Gospel of Barnabas (about the length of the four canonical gospels combined), I was quite unaware of the heated polemics that have long surrounded the text, and equally unaware of its status as a lightning rod between Islamic and Christian scholarship. I am more aware of these concerns today. And they are serious concerns, for I write in an age of political polarization, xenophobia, and fairly blatant anti-Islamism coming from the political right in the West, as well as equally rabid anti-Westernism coming from conservative elements within Islam. We are here at the corrosive border between major religions for, in dealing with the Gospel of Barnabas, the very nature of Jesus is at issue.

According to Islam, Jesus was a man, a prophet, and emphatically not divine. Historically speaking this was the early Ebionite view. In this important way, then, Islam links up with pre-canonical Jewish Christianity. This has been well-attested by scholars, including Robert Eisenman and Rod Blackhirst. Thus, Islam has always been able to claim substantial grounds for possessing a more authentic view of Jesus than does Christianity itself. Interestingly, Islam venerates (but does not worship) Jesus. Islam also rejects the entire Pauline kerygma.

GBar surfaced in the sixteenth century, first in an Italian version, and then a Spanish. Incidentally, much mystery surrounds a 52-page Syriac manuscript that came to light in 2000 and was quickly suppressed (largely by the Catholic church). Rumors are that it is an early, abridged form of GBar. In any case, a scholarly debate has long raged regarding the extant text’s antiquity. Christians defensively dismiss it as a very late confabulation—no older than the century of its discovery. Muslims, on the other hand, are much more prone to date it to antiquity:

The alleged gospel [of Barnabas] is regarded by many Muslims as going back to a manuscript from early Christianity, whereas Western scholars take it for granted that it was produced either in the later Middle Ages or in the early modern period. (O. Leirvik, “History as a Literary Weapon: The Gospel of Barnabas in Muslim-Christian Polemics.” Studia Theologica 54 [2001], p. 5.)

Blackhirst essentially views GBar as a secondary compilation of the canonical gospels, a “diatessaron” with much added material (see J. of Higher Criticism 7/1:2000, PDF).

My view, as noted above, is that GBar not only needs to be treated on an equal footing with the canonical gospels, but that its urtext may actually have preceded them. We may be dealing with an astonishingly overlooked and critically important witness to first century Christianity, one that contains a considerable amount of unfamiliar material—material that has not been “added” but is authentic, predates the canonical gospels, and was deliberately excluded by them. This is why I believe GBar is on at least an equal footing with the New Testament gospels. It truly is a ‘fifth gospel.’

Jesus in GBar utters numerous astonishing logia and parables not found in the New Testament—sayings that have the ring of authenticity and that cohere to more familiar pithy sayings and parables in the NT. To me, this is the most stunning and valuable aspect of this much-maligned gospel: it is potentially a rich source of new, authentic material coming from the mouth of the prophet at the foundation of the religion we call Christianity.

A very few parallels are offered to the New Testament and also to Christian apocryphal literature gleaned from my own research. I have not spent much time on this taxing aspect of the project, and if you can furnish additional parallels, please let me know.

Readers may be aware of my thesis that Christianity (and Yeshu ha-Notsri in particular) was influenced by faraway Buddhism. As a result, and in a departure from the norm, I will be giving Buddhist parallels to these sayings in GBar when known to me. I also will occasionally reference my ebook Buddhist and Christian Parallels (online here).

The color coding scheme for this series of posts on the Gospel of Barnabas is as follows:

Black font: Alternate versions of known sayings and parables. I include them because alternate readings can be valuable in their own right. Furthermore, the version in GBar may in fact be the more authentic reading of a saying that is also found in the canonical gospels. Here I have been selective in what to include, as a complete list of alternate readings would probably extend to hundreds of entries.

Red font: Sayings from the mouth of Jesus that are only found in GBar. I will omit sayings that appear to me to be of little importance, or even trivial (from one or another of the many editors of this text through the centuries).

Brown font: Entries that may go back to the urtext but probably not to Jesus/Yeshu. This category includes content reflecting Jewish-Christian tenets that probably goes back to the first century congregation that composed the urtext (such as that Jesus was a man, not divine, and the necessity to scrupulously observe Jewish Torah).

Green font: Occasional comments of mine (usually short, but sometimes extended) that will accompany many entries.

Each post will have a maximum of ten entries. I generally will not furnish the narrative frame in GBar for any saying or parable, due both to space considerations and also because the narrative frame is so often a secondary editorial addition. Finally, archaic English and religious language (“ye”, “thou”, “thee” “unto” etc) used by the Raggs is edited for style.

Finally, I plan to add a reference post, along the way, including abbreviations, a basic GBar bibliography, and the apparatus I use to locate any saying in the gospel (page, paragraph, section, etc).

As usual, your comments are welcome. I will gladly publish those at the bottom of a post that provide the reader with useful information or commentary.