32.         Truly I say to you that very few make true prayer, and therefore Satan has power over them, because God does not seek those who honor him with their lips, who in the temple ask with their lips for mercy while their heart cries out for retribution. Even as He said to Isaiah the prophet, saying ‘Take away this people that is irksome to me, because with their lips they honor me, but their heart is far from me.’ Truly I say to you that he who goes to make prayer without consideration mocks God.”        [XXXVI:38b, p. 85] 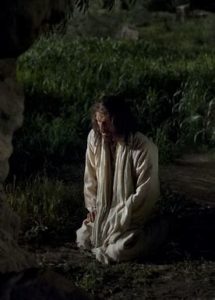 Jesus praying in the Garden of Gethsemane.
(Unattributed.)

33.         The disciples wept at the words of Jesus and besought him, saying, “Lord, teach us how to pray.”
Jesus answered: “Consider how you would feel if the Roman governor seized you to put you to death. With the same seriousness should you also pray. And let your words be these: O Lord our God, hallowed be Your holy name; may Your kingdom come in us; Your will be done always, and as it is done in heaven so be it done on earth; give us the bread for every day, and forgive us our sins as we forgive them that sin against us; and suffer us not to fall into temptations, but deliver us from evil, for You are alone our God, to whom belongs glory and honor forever.”         [XXXVII:39a, p. 85]

COMMENT: may your kingdom come in us. Compare Buddhism: “Truly friend, I say to you that within this very body, mortal as it is and only a fathom high, yet conscious and endowed with mind, is the world, the waxing thereof, the waning thereof, and the way that leads to the passing away thereof” (Sutta Nipata 919).
The belief that the kingdom of heaven is within the person is realized eschatology. This is compatible with Buddhism, Gnosticism, and Ebionism. It is an implicit rejection of the Catholic theology of the Second Coming of Jesus (“on the clouds”), and also of the Last Judgment.
In my opinion, the version of the Lord’s Prayer above and the version found in the Didache (8.2–3) are the two oldest extant versions of the prayer. The Didache differs only in lacking the words “in us.” This is significant—it shows that GBar has preserved an ascetic theological route, one that spurns materiality and that considers salvation to be strictly spiritual.
With the same seriousness should you also pray. Cf. Bdsm: “As if struck by a sword, as if your hair were on fire, so should you abandon the ‘I’ and walk mindfully.”          [Samyutta Nikaya 1.3.1]
• Cf. Lk 17:20–21; Jn 6:63, 4:24. Bdst-Chr Par Chp 9, 10. 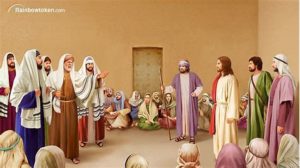 35.         [The priestly leaders] sent the Levites and some of the scribes to question [Jesus], saying, “Who are you?”
Jesus confessed, and he said the truth: “I am not the Messiah.”
They said, “Are you Elijah or Jeremiah, or any of the ancient prophets?”
Jesus answered, “No.”
Then said they, “Who are you? Say, so that we may give testimony to those who sent us.”
Then said Jesus, “I am a voice that cries through all Judea, and announces, ‘Prepare the way for the messenger of the Lord, even as it is written in Isaiah.’”          [XLII:44a, p. 97]

COMMENT: This passage is closely related to Jn 1:19–23. But in all the canonical gospels the announcement “I am a voice that cries… prepare the way…” is assigned to John the Baptist (Mk 1:2 etc), not to Jesus. The conflation of the Baptist with Jesus has been noted by some scholars, and this website offers two views (Robert Price and Georges Ory) that John, in fact, possessed “the spirit Jesus”, i.e., John was Jesus. Incredibly, this identity is made explicit in the routinely overlooked Hebrew Gospel of Matthew that survives in a medieval copy (George Howard edition, p. 11), which at Mt 3:10 baldly states “John is Jesus.”
The denial by Jesus, “I am not the Messiah” (= the Christ, the anointed one), is of course ultraheretical to normative Christianity. This repudiation of messiahship by Jesus in GBar will be frequent and emphatic (this is only the first of many examples), and it virtually proves that an early GBar compiler (if not the original author) was acquainted with the incipient theology of the Great Church and was strongly reacting against it.
What precisely does it mean to say that GBar repudiates the messiahship of Jesus? It essentially means three things: (a) GBar repudiates the doctrine of redemption, whereby the life, suffering, and death of Jesus have somehow redeemed us from our sins; (b) GBar repudiates the related doctrine of atonement, whereby we are somehow reconciled to God through the vicarious sacrifice of Jesus; and (c) GBar repudiates salvation through belief in Jesus as our indispensable savior—as our ‘Messiah.’ These three elements—redemption, atonement, and belief—are of course quite ‘Pauline,’ and thus it is clear that GBar stands in the Jewish Christian tradition with which Paul was famously at odds (Gal 2 etc). Never once does the gospel enjoin belief in Jesus. Indeed, over and over, GBar emphasizes the need for ‘works’ (in the Jamesian tradition), for a contrite heart, and for effort in order to effect salvation. Incidentally, works, a contrite heart, and effort are very Buddhist. To me, this all demonstrates that GBar belongs to a pre-Pauline stratum: it’s core is both older and more authentic than the writings of Paul.
It is noteworthy that the theology of a non-divine Jesus coheres with the Didache (see here), a tractate in which Jesus is God’s servant (chps. 9, 10) and fully human (cf. Ebionite theology).
It would appear, then, that GBar is a multilayered gospel. On the one hand it reacts to and rejects Pauline theology. On the other hand, it preserves a more ancient theology as well as possibly authentic logia not preserved by the canonical tradition. The principal purpose of this series of posts is, in fact, to extract that earlier material from GBar and to present it in a series of entries. 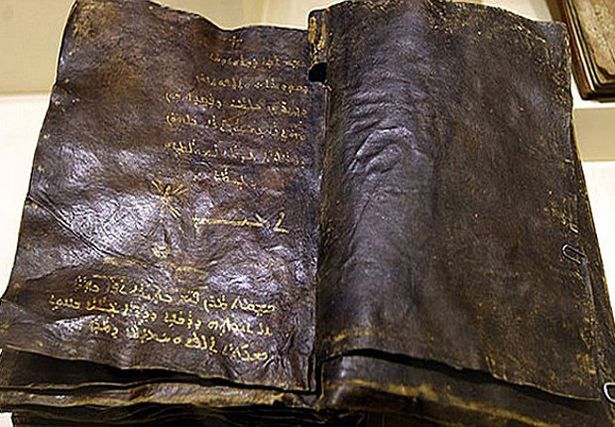 An alleged Aramaic version of the Gospel of Barnabas
(now held in the Ethnography Museum, Ankara, Turkey)

John, Matthew, Dositheus, Simon. I noted above that the canonical tradition places the cited passage in the mouth of John the Baptist. When considering the name “John,” we enter a murky world of hidden relationships. “John” (Jonathan, < Heb. Ya-natan) means “God/Yah Gives.” A Hebrew equivalent is Mattan-yahu, that is, “Matthew.” It so happens that, in the Babylonian Talmud (Sanhedrin 43a), “Mattai” is one of five disciples of Yeshu ha-Nostri—whom I have suggested was the actual founding prophet of Christianity (stoned for heresy by orders of the Sanhedrin and hung upon a tree ca. 70 BCE).
Furthermore, when translated into Greek, John/Jonathan yields Dositheus (“Gift of God”). The Pseudo-Clementine literature portrays Dositheus as the main disciple of John the Baptist. But the Dositheans (probably more correctly) considered Jesus (“Savior”) to be a cipher for Dositheus himself (NazarethGate, p. 459).
Links also exist between Dositheus and Simon [the] ‘Magus,’ i.e. Simon ‘the Zoroastrian priest/prophet of light.’ In the Pseudo-Clementine literature Dositheus and Simon vie for the mantle of John the Baptist. As so often happens when history moves into the realm of myth, differing interpretations of a teacher’s message become different personae. Thus, if a prophet/teacher’s message (call him John) gave rise to two different and opposing factions, an ancient heresiologist might refer to those factions as followers of ‘Simon’ and of ‘Dositheus’—a convenient and grossly simplified shorthand. Again, if one faction was preferred as orthodox, one could at any time refer to it as ‘followers of Peter.’ And in the Pseudo-Clementines we read of ‘Peter’ opposing ‘Simon Magus’ as if this were real history. In fact, it is myth—or (better), ‘religious pseudo-history.’
In fact, I suspect that all these names are late permutations of a single figure—the founding prophet who was indwelled by the Holy Spirit/‘Jesus.’
As regards Simon, he was also known as The Standing One, and “to stand” (amad) in Aramaic astonishingly means “to baptize” (Payne Smith p. 416)! Thus, these names lead us back to “John the Baptist” or, according to the Dositheans, to Jesus—whom most of the early Christian traditions link up with a spiritualized Joshua/Jesus, the hero who led the Israelites into the Promised Land. (On the plethora of early Christian characters with overlapping elements, see also here.)
It must be borne in mind that John the Baptist does not appear by name in GBar (nor in the Didache). This is intriguing and may, in fact, support the theory that for the original author of GBar these two figures did not exist separately—they were one, and the two figures bifurcated only after the original GBar came into existence.
Incidentally, the “messenger of the Lord” in the above citation does not refer to Mohammad (as it certainly does in some other passages of GBar), for we find the phrase in this very context in the canonical gospels (citing Isa 40:3). Thus, this passage is no Islamic gloss. Rather, we have touched here upon a very early stratum where the prophet John the Baptist possesses the saving spirit Jesus (literally “Savior”). John announces that immaterial savior, much as Jesus in the fourth gospel announces the Paraclete, namely, the “spirit of truth” that “dwells with you and in you” (Jn 14:17). That spirit of truth was, for these first century Christians, “Jesus” or “the Jesus.” The critical revolution that the early Jewish Christians effected, then, and that differentiated them from Jews, was that they spiritualized the figure of Joshua, son of Nun, even as they also spiritualized “the Promised Land.” For these first Christians (who predated even the original author of GBar), the Savior/Jesus is the Spirit of God that leads the disciples into a spiritual Promised Land. The disciples receive the Spirit by “standing” in water = baptism, where “water” is a cipher for gnosis.
Several other details stand out in the above citation, and I will mention them briefly. First of all, “Levites” are aligned with the priestly adversaries of Jesus. This is contrary to what my research has suggested, namely, that the rural and landless Levites traditionally were aligned with marginalized Jews who in fact were open to gnosticizing tendencies. That they are here aligned with the Jerusalem and temple hierarchy as interrogators of Jesus suggests to me that the author of GBar does not come from a gnosticizing milieu. We may note also that the disciple Matthew himself is known by the name Levi.
Finally, in the last sentence of the above citation Jesus announces, “I am a voice that cries through all Judea…” This reveals a very early tradition that locates the activity of Jesus not in the Galilee but in the more southerly province. In my book The Myth of Nazareth, I noted that the Q document locates Nazara in Judea, not Galilee (p. 304), and that John’s activity is also in Judea. Now, the frequent comings from Jerusalem of “scribes and Pharisees” to Jesus make much better sense if they traveled from Jerusalem to Qumran rather than all the way up to the Galilee. And this too makes sense in the context of GBar, where not only is Jesus’ activity largely in Judea, but the austere theology of this Jewish-Christian gospel is of a piece with the strict asceticism of the Dead Sea Scrolls.
If Qumran is implicated in this discussion, then the casting of Jesus from a precipice in Nazara/Nazareth (Lk 4:29) appears in a new light. Though casting down makes little sense in Nazareth of Galilee—where no such precipice exists—it makes excellent sense when located at Qumran, where high cliffs abound. Might the lucan pericope, then, preserve the relic of an authentic tradition that the founding prophet was violently expelled from the Dead Sea Sect? 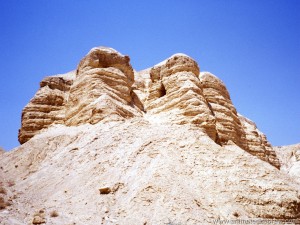 The cliffs of Qumran. 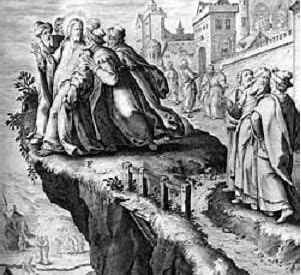 Jesus led to the sheer precipice outside the city of Nazareth. (Medieval woodcut.)