20.        And having said this, Jesus departed and went to a Mount Tabor, and there ascended with him Peter and James and John his brother, with him who writes this. Whereupon there shone a great light above him, and his garments became white like snow and his face glistened as the sun, and lo! there came Moses and Elijah speaking with Jesus b concerning all that needs must come upon our race and upon the holy city.
Peter spoke, saying “Lord, it is good to be here. Therefore, if you will, let us make here three booths, one for you and one for Moses and the other for Elijah.” And while he spoke they were covered with a white cloud, and they heard a voice saying, “Behold c my servant, in whom I am well pleased; listen to him!”
The disciples were filled with fear and fell as dead with their faces on the ground. d Jesus went down and raised up his disciples, saying, e “Fear not, for God loves you and has done this so that you may believe my words.”        [XLII:44a, p. 99]

b “concerning all that needs must come upon our race and upon the holy city”. The “holy city” is Jerusalem. It was destroyed in the Second (not the First) Jewish Revolt. This passage, then, certainly postdates 135 CE (as also does Mark chapter 13).

c my servant. This is GBar’s preferred characterization of Jesus, one that emphatically repudiates his divinity.

d The disciples “fell as dead… Jesus went down and raised up his disciples”. The phraseology evokes Christ’s descent into the underworld, known from the apocryphal Acts of Pilate (cf. Eph 4:9; 1 Pet 4:6).

e “Fear not, for God loves you and has done this so that you may believe my words.” This is the imprimatur noted above.

COMMENT:
a Mount Tabor. This mount is not mentioned in the canonical gospels, but an old and persistent ecclesiastical tradition identifies it as the place of the Transfiguration. The mount is located in Lower Galilee at the eastern end of the Jezreel Valley (not far from the traditional site of Nazareth). 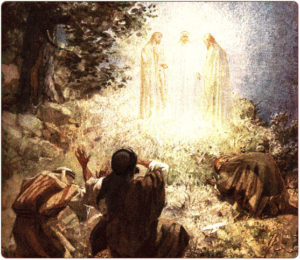 Why does tradition associate Mt. Tabor with the Transfiguration? And, since this is so, why is the name “Tabor” not found in the canonical gospels, but only in very obscure Christian apocrypha (see below)? E. Malbon notes that the mount is figuratively the meeting place between God and humans, an ideal landscape for an epiphany or theophany. But the familiar canonical accounts of the Transfiguration are not so much an “epiphany or theophany” as they are an imprimatur: God publicly affirms that Jesus is “my beloved son” and orders mankind to “listen to him.” It is as if the evangelists wished to quash all doubts regarding the status and authority of their Jesus by having God Himself establish same.
Here is what the second century Church Father Origen writes, citing the (mostly lost) Gospel of the Hebrews: that Jesus himself said, “Even so did my mother, the Holy Spirit, take me by one of my hairs and carry me away on to the great mountain Tabor” [Schneemelcher I:177]. In this passage, Mt. Tabor is the place of activity of the Holy Spirit which, being spiritual, must be within Jesus. In other words, an early tradition existed that Mt. Tabor symbolized the high place of inward spiritual transformation. In Buddhist terms, this would be called the spiritual place of enlightenment. Indeed, all the accounts of the Transfiguration emphasize a great illumination: “there shone a great light above him, and his garments became white like snow, and his face glistened as the sun.” These outward manifestations, however, can only be feeble attempts to describe the vital inward transformation that takes place, a transformation that gnostics saw as the gaining of gnosis. (And, lest we forget, Buddhism is the quintessential gnostic religion.)

Enki and the Anzu bird (Sumerian cylinder seal).
The god of wisdom, Enki, has streams of water (gnosis) rising from his shoulders. The fact that the water goes upwards manifests the miraculous power of wisdom over matter. The fish, also swimming upwards, symbolize the gnostic devotees of Enki (saints) who swim victoriously against the current of profane life. The sun god Shamash, head and torso visible below, is symbolically rising from the eastern gate of the horizon. Note that Enki has his foot on the horizon and is positioned higher than Shamash, symbolizing that Enki is superior even to the Sun. 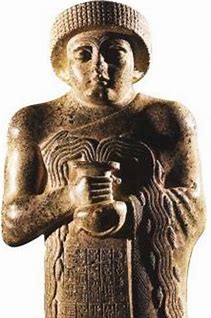 In fact, Mt. Tabor has a very ancient history in gnostic lore. J. Lewy showed that in pre-Christian times “Mt. Tabor was a place of Tammuz-worship” [Tabor, Tibar, Atabyros, p. 360]. He writes of “little doubt about the existence of an old cult of Tammuz in the fertile region around Mt. Tabor.” Now, Tammuz is the Aramaic name for the Greek Adonis, the God who passes with safety from death to life. (Origen writes that women weep for Adonis when he dies, but then rejoice “because he has risen from the dead.”) ‘Tammuz’ is also a phonetic approximation of the Sumerian Dumuzi, short for Dumu-zi Abzu, “Son [Dumu] of the True [Zi] Deep Water [Abzu].” The Abzu, we may recall, was the home of Enki, underwater god of gnosis. Already in Sumerian times, life-giving water was associated with gnosis, and myriad portrayals of Enki show founts of water going upwards from his shoulders or (alternatively) from a vase that he holds. How does water go upwards? It is in fact the same miracle that allowed the waters of the Red Sea to roll back, and that allowed the waters of the Jordan River to do the same when Joshua crossed over with the Israelites.
In later times, the worshippers of Tammuz were called the Sabians (“Baptizers, Immersers”), and their center was Harran in Northern Syria. They also worshipped the deity Sin, the moon-god.
The etymology of tabor is also revealing. Lewy tells us that is derives from tibira, “smiths or metalworkers.” In the OT these smiths were known as Kenites, and their eponymous ancestor was Tubal-Cain. (The “l” of Tubal readily interchanges with “r”, thus TBR [Tabor] <—> TBL [Tubal]—Lewy 365.) Though hardly known, the Kenites play an outsized role in Jewish (and Christian) history. Jethro, the priest of Midian who mentored Moses, was a Kenite. The Kenites, we are told, were of the house of Rechab.
The Rechabites were scribes (1 Chr 2:55), shunned alcohol, and were an ascetic people set apart. James the Just was reputedly a Rechabite. It is pertinent that, according to Jer 13:18-19, the Rechabites would “never lack a man to STAND before the Lord.” The Hebrew word for “stand” here is amad—the same word used to describe Simon Magus as “The Standing One” (see my Comment to prior entry #19).
The foregoing, I believe, is enough to show that a great deal more is going on with ‘Mt. Tabor’ than at first meets the eye. Behind the biblical texts (both Jewish and Christian) are hidden traditions suggesting the possible meeting of man with God, and the spiritual transformation that can result from that meeting—a meeting characterized by the acquisition of gnosis.
Finally, the Transfiguration is (correctly) viewed not merely as the meeting of man and God but as the union of man and God (“hypostatic union”) in the tradition of Hesychasm, a mystical tradition in Eastern Christianity. Space does not permit a more detailed examination of this tradition, save to say that in Hesychasm the goal is “an experiential knowledge of God” and “union with God on a level beyond images, concepts and language” through gnosis (Evagrius Ponticus). The Tabor Light theology of Gregory Palamas is one development, as is the theology of the divinization of the righteous (cf. Theophanes of Nicea’s Five Orations on the Light of Tabor).