The Parable of the Three Vinedressers

43. [Jesus said] “I will give you an example. There was a man who had three vineyards which he let out to three vinedressers. Now, the first vinedresser did not even know how to cultivate a vineyard, and it brought forth nothing more than leaves.
“The second vinedresser taught the third how the vines ought to be cultivated. And the third vinedresser carefully listened and cultivated his vineyard as he was instructed, so that his vineyard bore much fruit.
“Now, though the second vinedresser instructed the third, he left his own vineyard uncultivated, spending his time solely in talking.
“When the time came to pay rent to the master of the vineyard, the first said: ‘Lord, I knew not how your vineyard ought to be cultivated. Therefore, I have not brought you any fruit this year.’
“The Master answered, ‘Fool! Do you live alone in the world? Why didn’t you ask advice from my second vinedresser, who knows well how to cultivate the earth? You will certainly pay me that which you now owe.’
“Having said this, the master condemned the first vinedresser to work off his debt in prison until it was all paid. Later, however, pitying his simple nature, the Master was moved with pity for the first vinedresser and liberated him, saying, ‘It is enough for you that I forgive you your debt. Begone, miscreant, and never work for me again!’
“Now, the second vinedresser came, to whom the Master asked, ‘Welcome, my vinedresser! Where is the harvest that you owe me? Surely, since you are expert in pruning the vines, the vineyard that I rented to you must have borne much fruit.’
“But the second answered, ‘Master, your vineyard is in disrepair because I didn’t prune the vines or work up the soil. Unfortunately, the vineyard has not borne any fruit and I can’t pay you.’ 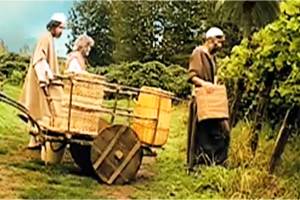 “Whereupon the master called the third and with wonder said, ‘You told me that this man, to whom I rented the second vineyard, perfectly taught you to cultivate the vineyard which I let out to you. How then can it be that the vineyard I rented to him should not have yielded fruit, seeing it all is the same soil?’
“And the third answered, ‘Master, vines are not cultivated by talking. He who wishes them to bring forth fruit has to sweat his shirt every single day. But how can your vineyard bear fruit, O master, if he does nothing but waste time talking? I have given you rent for two years, and sure it is, master, that if he had put into practice his own words he would have given you enough rent for a full five years.’
“Upon hearing this the master became angry. [He summoned the second vinedresser] and said to him with scorn, ‘You have indeed been a good-for-nothing for not cutting away the wood and leveling the vineyard, and your reward will now also be fitting!’ And having called his servants, the master had the second vinedresser beaten without mercy. And then he put him into prison under the keeping of a cruel servant who beat him every day and never was willing to set him fee, even despite all the entreaties of his friends.”

COMMENT: This beautiful, long, and entirely new parable conforms to a number of familiar parables and sayings in the New Testament. Let us briefly analyze the main elements: (a) The first vinedresser (“tenant,” cf. Mt 21:33 f) is grossly incompetent. In fact, he is no vinedresser at all, but a pretender perhaps simply wanting employment. (b) The second vinedresser, on the other hand, is not merely competent but even expert at the required tasks. However, rather than using his competence and actually working (“sweating a shirt every day”), he is lazy and spends his time talking—namely, instructing the third vinedresser. (c) The third vinedresser hears the instruction of the second and does his best, providing the master upon his return with double what would normally be expected, that is, with the equivalent of two full years of fruit.
The three vinedressers can be ranked according to their approval by the master: 3rd, 1st, and 2nd. The third vinedresser obviously did the best of the three—he met all the master’s expectations and even excelled those expectations. But notice that the master has no praise for him. This is, evidently, a severe master, one who simply expects the best that a person is able to give. Anything less than perfection is cause for reprimand, and perfection itself is assumed.
As for the first vinedresser, he produces nothing and pleads ignorance. The master is angry, knowing he could have sought advice from the second vinedresser or at least could have tried to produce a harvest. The master initially puts him in debtor’s jail, but then he relents and simply fires him as a good-for-nothing.
It is the second vinedresser who receives the master’s uncompromising rage. Why? The answer is the crux of this parable. After all, the second vinedresser instructed the third, and thus he was indirectly responsible for producing two years’ worth of harvest. One would think that the master would have taken this into account. But, no—credit for the work of the third vinedresser remains with the third, it does not belong to the second. In other words, one’s work (or lack thereof) is one’s own—it does not belong to anyone else, no matter if one may have been instructed or not. 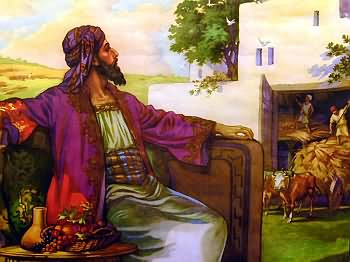 If one knows how to do the work, then sitting by and not working is doubly condemnable.

It will be granted that the second vinedresser does not get any credit for the third’s work. Still, why is the master so enraged at him? The reason is this: the second vinedresser knew much better. Indeed, he was expert at the task to be accomplished, and yet he did nothing but talk. In a sense, the first and second vinedressers are opposites: one was ignorant and did nothing, while the other was expert and did nothing. Though they both deserve reprimand, it is the expert who deserves the greater reprimand.
We are reminded in this parable of the Pharisees, so often reprimanded by Jesus in the canonical gospels as those who love to strut about in long robes (Lk 20:46), who love to sit in the marketplace, who love to instruct others but who themselves produce nothing. In the New Testament, Jesus’ anger at them is frequent and uncompromising. They know better, and yet they themselves do not produce.
The Pharisees fathered the severe Rabbinical tradition that exists to this day. That tradition is marked by extreme learning and the ability to “tithe mint and dill and cumin” but frequently also by the neglect of “justice, mercy, and faithfulness” (Mt 23:23). The Rabbis have always spoken authoritatively, but the word for someone who speaks learnedly but who does not do as he instructs is ‘hypocrite,’ a word that occurs no less than twenty times in the canonical gospels—typically with reference to the Pharisees and/or “scribes.” Those hypocrites were Jesus’ principal target. Jesus was less interested in the bumblers who didn’t know better (the first vinedresser). Nor did Jesus have any particular message of praise or blame for the capable, hardworking majority who go about their lives as they have been instructed by the elders (the third vinedresser). Rather, Jesus reserves his message for the elders themselves, for those experts who are capable of producing five years’ yield from their allotted vineyard (the second vinedresser) and yet who not only produce nothing at all, but who talk a great deal and in turn expect to be treated with deference by others as ‘expert.’
We are here very close to the essential dynamic of Jesus’ ministry, the dynamic that even got him killed. Jesus struck a nerve among the elites of the Jewish religious establishment—he was feared by them because he saw through their sham, as entitled imposters who instruct, who consider themselves the best, but who are in fact the worst because they do not produce, though they are easily capable of doing so.
The person, of course, who uttered the above parable was not Jesus of Nazareth. That Jesus is himself a sham, as Jesus Mythicists realize. In my opinion, there was another Jesus—with the appropriate name Yeshu—who lived a few generations before the turn of the era, was tried by the Sanhedrin, and was sentenced to death, being stoned and then hung up on a cabbage stalk. That Jesus/Yeshu was the author of the authentic sayings and parables enshrined in our New Testament, in the Christian apocrypha (e.g. the Gospel of Thomas)—and also in the Gospel of Barnabas.

[In the next post, Jesus expands on the above parable with several explanations, including one or two additional shorter parables.—RS]