Talmudic records relate, as we have seen, that the nasi Joshua ben Perachiah excommunicated Yeshu ha-Notsri (literally, “Jesus the Nazarene”) on their way back from exile in Alexandria, Egypt, probably in 76 BCE, the year that the anti-Pharisee King Janneus died and his pro-Pharisee wife Salome Alexandra ascended to the throne. If we combine Ibn Daud’s chronology with what we learn from Talmudic passages, it appears that Yeshu was twenty-four years old at the time.

Yeshu would not have been able to return to Israel with impunity. After all, excommunication is not merely a ban from pharisaism—it is the final, complete, and irrevocable expulsion from Judaism. For a young man raised in the entourage of the Sanhedrin (his association with Perachiah is attested by the Talmud in several places), and himself possibly destined for membership in that elite body of Jewish aristocracy, the excommunicated Yeshu would henceforth have been considered an enemy by all his former friends. His fall from grace must have been colossal.

Whatever we might discover in future about Yeshu’s formation, ancestry, and religious education, this much is clear: after his excommunication he was no longer a Jew. That is, in fact, the meaning of ‘excommunication.’ The head of the Sanhedrin and arguably the highest Jewish religious authority in Israel had destroyed Yeshu’s reputation and removed the young man from his religion and from the culture of his birth and ancestry. Yeshu was now a pariah not only in his homeland, but no doubt also in the Jewish enclave of Alexandria where he grew up.

But what was Yeshu’s homeland? After all, he lived in Egypt from the age of six until the age of twenty-four. Was, then, his homeland Israel? Was it Egypt? Was it some combination of the two cultures? Or perhaps, was it neither Israel nor Egypt, but some lofty extra-terrestrial realm recorded, for example, in certain passages of the canonical gospels:

It may well be that the excommunication pushed Yeshu to the extreme view reflected in this saying. The utterance complements other sayings credited to Jesus, forming a body of material that clearly points in a dualist direction, disparaging materiality, the creation, and what man presumes to accomplish here below. The above saying basically asserts: ‘The world is valueless. Do not waste any effort over it or engaging with it.’ (Cf. “The flesh profiteth nothing,” Jn 6:63, etc.)

We may cast about all we wish for where the young exile would have contacted such a thoroughly un-Jewish and also un-Hellenistic view as the above. If we do so, only one solution will appear: Buddhism. The foregoing citation is strikingly Buddhist, as the following (of many possible examples) show:

“I say to you, brethren, that unless you reach the end of the world, you will in no wise put an end to suffering.”
(Anguttara Nikaya 9.4.7)

Of course, the view that real value exists only in an extramundane realm is anathema to Judaism, which holds that materiality, as the creation of God, is fundamentally “good” (Gen 1:31 etc). This is our first sign of a deep and fundamental revolution in Yeshu’s thinking, one that must have occurred while he was still in Egypt—an inner revolution that ultimately contributed to his excommunication from Judaism.

For a young man steeped in the minutiae of pharisaic legalism, such a fundamentally un-Jewish view as the preceding could not be formed overnight. It is the view neither of a boy nor even of an adolescent. It is the view of an adult who has thought through the deepest problems of existence and has arrived at a personal synthesis. Evidently, Yeshu’s thinking while in Egypt developed in an ultra-heretical direction, a direction actually quite well known in Alexandria in Yeshu’s day. It was Buddhism, a religion that emphasizes the existence of an extra-mundane realm of true value. In support of this thesis, below is a more fulsome selection of parallels between Buddhism and Christianity relating to the the theme “Not of the world,” drawn from my ebook Buddhist and Christian Parallels: 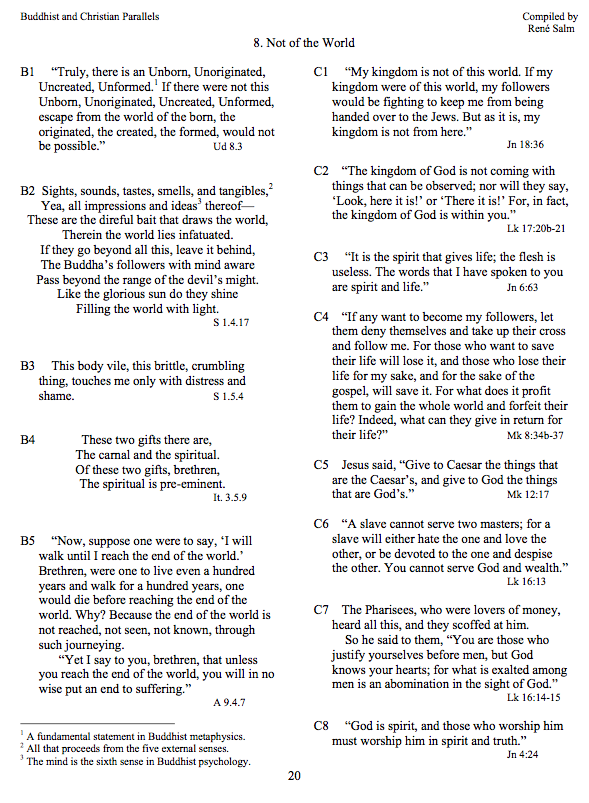 Finally, mention can be made of a short Buddhist saying in the famous collection known as the Dhammapada. It reads:

“Few reach the further shore. Most run up and down this shore.”
(Dhammapada 85)

As any Buddhist will avow, the “further shore” is nirvana, and “this shore” is the world. The analogy implies a river or body of water, and the further shore is ‘the other side,’ the existential beyond. Incidentally, a Christian gnostic sect in antiquity was known as the Peratae, “those who cross over.” As is well known, in the Gospel of Mark Jesus often goes to ‘the other side’ (eis to peran)—a favorite phrase of the evangelist—and we must wonder whether the evangelist was writing metaphorically and/or allegorically.

Could there be a connection between Buddhism and the Gospel of Mark? Along with myself, the late Hermann Detering indeed thought so.