Unless he was living under a rock, Yeshu would certainly have encountered Buddhism in Alexandria. We know that the Indian emperor Ashoka sent Buddhist missionaries to the cosmopolitan city about 250 BCE (Rock Edict 13), this in response to a request from the curious and extravagant Pharaoh Ptolemy II Philadelphus. No doubt the Indian missionaries had copies of Buddhist sutras for the Alexandria library, which Philadelphus founded. Legend has it that Philadephus allowed no ship to dock at the harbor of Alexandria unless its cargo included new acquisitions for the library.

The Alexandria library, however, was only part of the even more consequential Museion which, analogous to a modern university, brought together some of the best scholars of the Hellenistic world. Arguably, the Museion was the greatest institution of learning in antiquity. More than 1,000 scholars lived there at any given time. Staff members and scholars were salaried by the Museion and paid no taxes. They also received free meals, free room and board, and free servants. 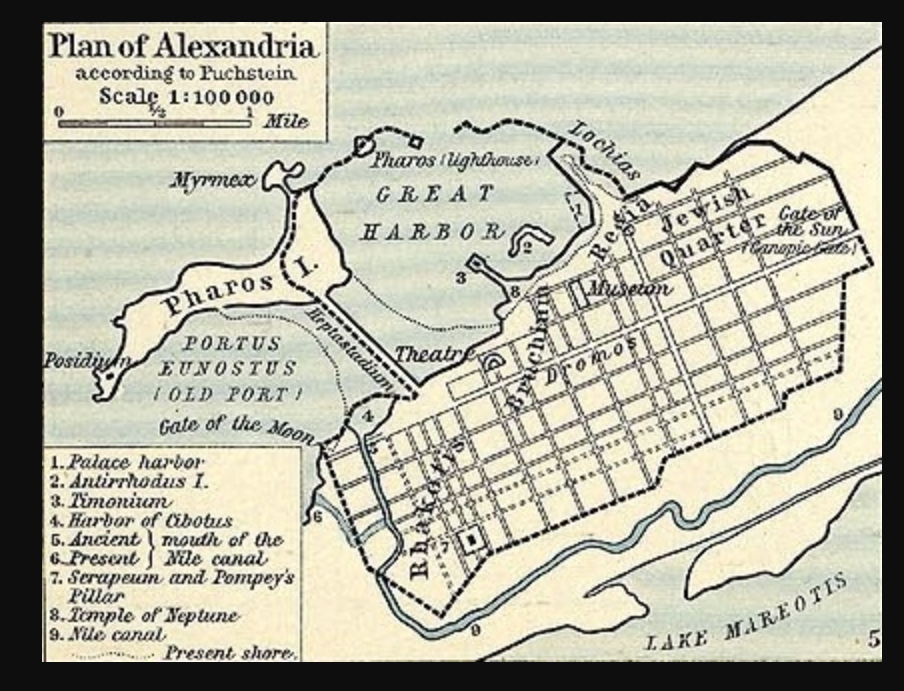 Alexandria in antiquity. Note the Museion adjacent to the Jewish Quarter at the upper right.

The Museion’s scholars conducted scientific research, published, lectured, and collected as much literature as possible from the known world. In addition to Greek works, foreign texts were translated from Assyrian, Persian, Hebrew, Indian languages, and other sources. The edited versions of the Greek literary canon that we know today, from Homer and Hesiod forward, exist in editions that were collated and corrected by the scholars assembled in the Museion at Alexandria. It is also known that the Septuagint was translated in Alexandria from Hebrew into Greek in the middle of III BCE by Jewish scholars, at the request of Ptolemy II Philadelphus and probably at the Museion.

Not without interest for our study is that the Museion was located in, or immediately next to, the Jewish quarter in northeast Alexandria (see map)—only a short walk from where Yeshu certainly resided during his formative years in exile.

We are in the process of slowly, incrementally, and inexorably recreating—here for the first time—the long ignored and suppressed biography of the founder of Christianity. Understandably, Judaism ignored that biography. In its eyes, Yeshu ha-Notsri was merely a misguided and troublesome apostate. Hence, Jewish records make only a few tangential references to Yeshu, with the rare explicit account such as occurs at b. Sanh. 107b.

Christianity, however, suppressed the biography of Yeshu with its full force and from the very beginning of the canonical tradition. Why? Because the biography of Yeshu ha-Notsri gives the lie to the biography of Jesus of Nazareth. As a result, it is my suspicion that many documents were destroyed, passages expunged, and texts altered through the centuries that might lead away from Jesus of Nazareth to Yeshu ha-Notsri. Given the manifest Christian penchant for destroying documents (and even heretics) though the ages, this is far from an idle conspiracy theory.

In light of many fundamental parallels between the teachings attributed to Jesus and those attributed to the Buddha, it is also my conviction that Yeshu ha-Notsri became aware of Buddhism while in Alexandria, became fascinated by it, and eventually became one of its converts. This is the only adequate explanation, to my mind, that satisfies all the facts: Yeshu’s astonishing rejection of a promising future in Judaism, his excommunication, and the Buddhist nature of his eventual teachings.

It is important to note that the Buddhist way to salvation is through personal effort leading to gnosis/understanding/‘enlightenment.’ Though not customarily viewed this way, Buddhism is the quintessential gnostic religion. In Buddhism, gnosis saves.

In the preceding post I examined a major theme common to both Buddhism and Christianity: that true value is ‘not of the world.’ We know this theme from a number of canonical sayings placed in the mouth of Jesus of Nazareth, and also from numerous Buddhist passages. I furnished a number of relevant parallels from both traditions in the prior post. Of course, those parallels are not identical in wording, for they come from two teachers living in different epochs and different cultures. Nevertheless, the parallels lead to the same general conclusion—that this transient world of matter is but a decoy, and that true life and true value lies in the unseen realm of the spirit free from the seductions of matter. It was further noted that this radically un-Jewish view would have taken time to develop, and that Yeshu would have initially contacted such a view during his long exile in Alexandria as a young man. That possibility is strengthened as we continue to examine the future teachings of the prophet, memorialized not only in the canonical gospels under the moniker ‘Jesus of Nazareth,’ but also in the rich gnostic and apocryphal literature that has long been marginalized by Christianity and considered heresy. 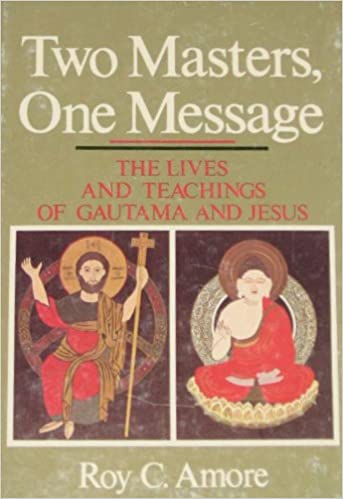 Both canonical and non-canonical Christian literatures offer numerous points in common between Buddhism and Christianity, as a number of scholars have noted in the past (see, e.g., Roy Amore’s Two Masters, One Message, 1978). We have already examined one such element in common—‘Not of the world.’ We now look at a second element fundamental to both religions.

Self denial—usually referred to as renunciation in the Buddhist context—is also an important emphasis of Jesus/Yeshu in the canonical gospels. Renunciation can take many forms, including voluntary poverty, chastity, non-violence, and homelessness. Each of these is well represented in both Buddhist and Christian texts. One of the Christian passages cited in the preceding post (C4) is Mk 8:34–37:

“If any want to become my followers, let them deny themselves and take up their cross and follow me. For those who want to save their life will lose it, and those who lose their life for my sake, and for the sake of the gospel, will save it. For what will it profit them to gain the whole world and forfeit their life? Indeed, what can they give in return for their life?”

If we remove obviously secondary elements—for example, a teacher would not exhort his disciples to “take up their cross and follow” him before he himself had been crucified—and place the saying in the second person, we read:

Here Jesus/Yeshu is exhorting his followers to self denial, a major theme in Buddhism. The Buddha himself set the ideal example, for he reputedly abandoned status (royalty), riches, and even family (he was married and had a son at the time) in order to find enlightenment/gnosis. In fact, one readily finds all three of these subthemes related to renunciation in the canonical words attributed to Jesus:
– abandoning status (Lk 14:10–11)
– abandoning riches (Mk 10:24–25; Mt 19:21; Lk 18:22; 12:33–34)
– abandoning family (Mt 10:37–39).

If my overall thesis is correct, then Yeshu ha-Notsri became acquainted with the Buddhist theme of renunciation in the early part of the first century BCE, during his long exile in Alexandria and before his excommunication from Judaism at the age of twenty-four. Arguably, renunciation is second only to the doctrine of karma in Buddhism (‘you reap what you sow’). And both doctrines—karma and renunciation—are profusely attested in the gospel sayings of ‘Jesus.’ 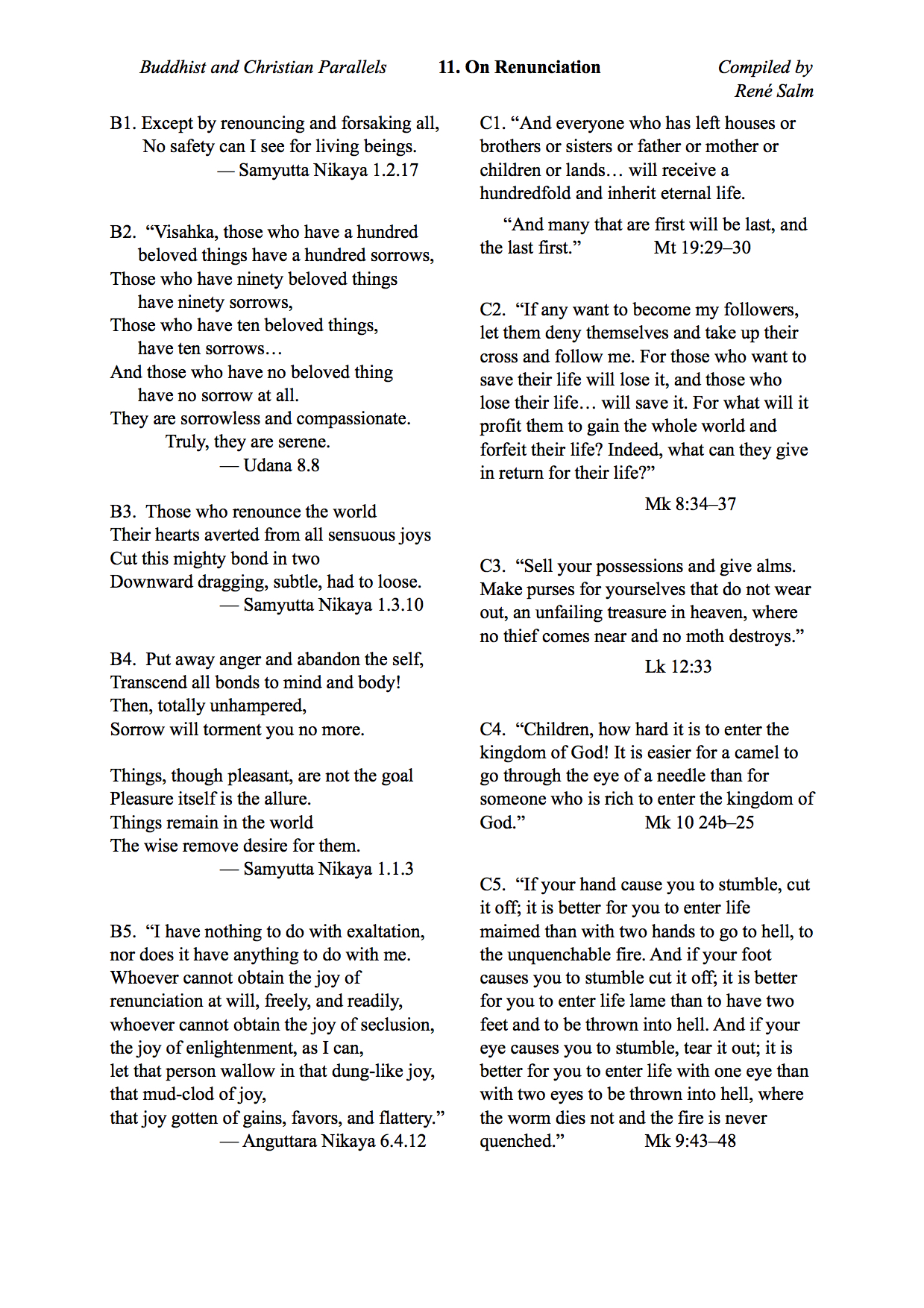