In prior posts I have hinted that, after his excommunication in Egypt at age twenty-four, Yeshu ha-Notsri (not his actual name) returned to Palestine. The chronology for Yeshu that I have been using was pieced together from various places, including the Talmud (which explicitly dates Yeshu to the time of Joshua ben Perachiah, i.e., early I BCE) and the medieval Jewish writer Abraham ibn Daud (who gives a lifespan for Yeshu of about 34 years and his date of death in the 60s BCE). Additional information came from Epiphanius who—in an apparent slip of the pen—also dated the founder of Christianity to the time of King Janneus and Queen Salome Alexandra.

The next step in our search for the prophet’s story concerns what happened after his excommunication. Here Jewish records fall silent. In any case, those records were already off the beaten path—at least, where Christians are concerned, for very few New Testament scholars occupy themselves with the Talmud. Now, however, because the Jewish records themselves fall silent, we must venture much, much deeper into the forest of literature that survives from Roman and Byzantine times. The obscure traditions that preserve clues regarding Yeshu have either long been marginalized, such as the Samaritans and Mandeans, or they are already extinct, such as the Manichaeans and the plethora of Gnostic sects described by the Church Fathers.

Regarding what happened to Yeshu after his excommunication, the first clue comes from a passage of Epiphanius, that erudite but absent-minded heresiologist of the late fourth century. But Epiphanius writes not of Yeshu in the passage I wish to signal, but of Dositheus, the Samaritan heresiarch! The difference in names is astonishing—but don’t let that throw you off the path. Recall (from the preceding post) that Yeshu’s given name was in all likelihood Yonathan (“John”). This Hebrew name—a common one—means “Yahweh Gives” or, if you prefer, “Gift of Yahweh” (Ya-nathan). In Greek, there are two equivalents: Theodore (Theos-Doron, the feminine being Dorothea) and Dositheus (Dosis[< didwmi]-Theos). Thus, the names Yonathan and Dositheus are linguistically compatible. This alone, of course, does not mean that the two religious figures from antiquity are identical. What Epiphanius writes about Dositheus, nevertheless, confirms that very fact, for he relates concerning Dositheus what we have already learned concerning Jonathan/Yeshu:

Dositheus was a mixture, because he turned from the Jews to the Samaritan peoples. He was a leading student of the Law and the Jewish repetitions of it, and ambitious for the highest rank. But as he failed to achieve it and was not considered worthy of any special respect among the Jews, he defected to the Samaritans and founded this sect.       (Epiphanius, Panarion 13)

Several elements in this short passage will already sound familiar to readers of these posts:

(1) “He was a leading student of the Law and the Jewish repetitions of it, and ambitious for the highest rank.”

We have seen that Yeshu ha-Notsri was a young man in the company of the leading Pharisee, Joshua b. Perachiah. They fled together to Egypt in the early first century BCE, in order to escape the pogrom against the Pharisees instigated by their arch-enemy, King Alexander Janneus. It may be, as already noted, that Yeshu was himself related by blood to Perachiah. In any case, the Talmud informs us that he was associated in some way to the malkuth, “government.” Evidently Yeshu was an important young man, the scion of an aristocratic Jewish family, sufficiently important to accompany Perachiah into exile and to be repeatedly noted by subsequent rabbis in the Talmud.

It is relevant that the New Testament figure of Jesus is obviously also well instructed in Jewish Law and the “repetitions of it,” for Jesus is constantly besting the scribes at their own game—something impossible if he were a country bumpkin from Nazareth. We are now able to offer a solution for this curiosity: the evangelists based their figure of Jesus on authentic tradition, on a promising, well educated Pharisee known to the later Talmud as Yeshu ha-Notsri, a young man bought up at the very center of Jewish religious power and perhaps himself groomed for the Sanhedrin (cf. “ambitious for the highest rank,” in the words of Epiphanius).

These words also sound familiar. Yeshu “failed to achieve” a position of honor in Judaism, a place in the Sanhedrin, or any other distinction in the religion. Quite the contrary. He was excommunicated for “apostasy”, for worshipping “a brick”, and for “practicing magic”—among other accusations. Yeshu certainly “was not considered worthy of any special respect among the Jews.”

(3) [Dositheus] “defected to the Samaritans and founded this sect” [i.e., the Dositheans]

This is most interesting because if Epiphanius is actually referring (unbeknownst to him, of course) to the founder of Christianity, then we have here new and astounding information: the figure who founded Christianity also founded Dosithean Samaritanism! Of course, we haven’t yet established with any certainty this Jesus-Dositheus link (via Yeshu ha-Notsri). But the elements, though scanty, are present. And, as we shall see shortly, those suggestive elements will rapidly accumulate.

Abu’l Fath was a Samaritan historian who lived in the fourteenth century. His history is one of several chronicles to survive, at least piece-meal. Abu’l Fath’s “chronicle” was published in 1895 in Latin, then translated into English by John Bowman (Samaritan Documents 1977, excerpts). Abu’l Fath calls Dositheus “Dusis,” but he clearly has the Samaritan heresiarch in mind. I first give only a short passage from the medieval chronicler:

Now the origin of Dusis was from the mixed rabble who went out with the children of Israel from the land of Egypt to Nablus.       (Bowman 163)

We learn here that, according to the Samaritan chronicler, Dusis/Dositheus came from Egypt. Furthermore, he was of “the children of Israel”—that is, Dositheus was among the Egyptian Jews.

“Mixed rabble” is merely Abu’l Fath’s disparagement of Dositheus’ heritage, given that the chronicler had no relevant information and was hostile to Dositheus. After all, Dositheus founded a heresy that Samaritanism promptly rejected. (Hopefully, more on that Samaritan schism later.) 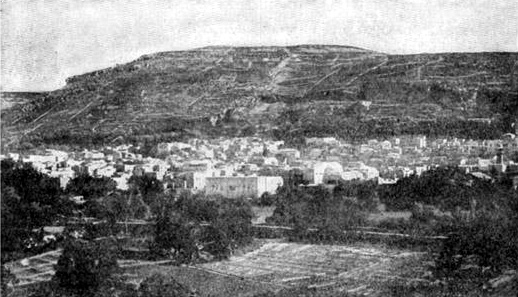 The above citation also tells us that Dositheus went to Nablus. Now, Nablus is the semitic corruption of “Flavia Neapolis,” so named by Vespasian in 72 CE. However, Nablus has a very ancient and august history. It is the biblical Shechem, located in the hill country of Ephraim, the first capital of Israel and the most hallowed city in the Pentateuch, with links to the patriarchs Abraham, Jacob, Joseph, and Joshua.

Shechem famously lay between two great hills, Mounts Gerizim and Ebal. The inhabitants of Samaria chose to build their temple atop Mt. Gerizim (ca. 450 BCE?), which the Samaritans consider to be the highest, oldest and most central mountain in the world.

Israel and Judah are the two kingdoms of the Jews in the First Temple Period. While Jerusalem was always the religious center of the southern kingdom of Judah, Shechem was similarly the religious center of Israel. The Jerusalemite, Hasmonean King John Hyrcanus I destroyed the Samaritan temple about 120 BCE and enslaved most of the Shechemites. The Samaritan temple would never be rebuilt. A decade later he returned and ravaged all of Samaria.

If our reconstruction of Yeshu’s history is at all correct, then he/Dositheus came to Shechem shortly after his excommunication, that is, about 75–70 BCE. The destruction of Samaria and its temple would still have been fresh, and the hostility of Samarians (inhabitants of Samaria) towards the Jews would have been most keen.