The preceding series of posts, “Yeshu ha-Notsri as the founder of Christianity,” is now complete. Those fifteen posts serve as an introduction to a new account of Christian origins presented on this website. The series began with an examination of the figure Yeshu ha-Notsri in the Talmud, an obscure figure that Christians have long considered anomalous and quite curious. We investigated what exactly the Talmud has to say about Yeshu, brought those clues together, and constructed a preliminary biography of the prophet.

Yeshu lived in the early first century BCE. He was a Pharisee, a protegé of the leading Pharisee in Judaism, Joshua ben Perachiah. Joshua and Yeshu (together no doubt with other aristocratic Jews, their families, and servants) fled to Alexandria in Egypt when war broke out between the cruel King Alexander Janneus and the Pharisees (Josephus Ant. 13.14 etc). In an earlier post I suggested this flight was in the 90s BCE, but I have now refined my calculation to 88–82 BCE. While it is possible that Pharisees fled the country earlier, civil war between Janneus and the Pharisees broke out c. 88 BCE, and the infamous crucifixion of 800 opponents of Janneus took place c. 83 BCE, as far as I have been able to tell.

Thus, if Yeshu were born c. 100 BCE (per the dating of Abraham ibn Daud), then we have a broad window for his flight to Egypt with Perachiah—Yeshu would have been between twelve and eighteen years old upon arrival in Alexandria. The Pharisees definitely did not return to Palestine before Janneus’ death in 76 BCE. This means that Yeshu’s stay in Egypt probably lasted between six and twelve years. In fact, he could have stayed longer in Egypt, because once he was excommunicated by Perachiah it is doubtful that he would have hurried back to Palestine.

We have seen that the foregoing skeletal account receives confirmation from disparate sources including the Talmud, Epiphanius (who lived before the Talmud was assembled), and the medieval Jewish scholar Abraham Ibn Daud. There is enough material and mutual confirmation in these accounts that the historian can be sure somebody lived with the above general biographical details. We further learn from the Talmud that Yeshu subsequently “led all Israel astray” and that he was finally executed at Lydda (Lod), according to strict stipulations in Jewish religious law.

We can also infer some related information of a general nature regarding Yeshu’s parentage and career. He was somehow related to the “government” (malkuth). He was obviously very important—or, at least, very influential/successful—otherwise the Jews would simply have forgotten him. But they didn’t. He is noted in numerous passages of the Talmud, which also betrays considerable sensitivity regarding this prophet—not only does it use a number of pseudonyms for him (including Yeshu, Balaam, Ben Stada, etc; see Herford, Christianity in Talmud & Midrash), but some passages express regret, no doubt due to the unusual course of events that eventually led to the rise of a new religion. Thus in one place the rabbis take Perachiah to account for his handling of the young upstart: “Ever let the left hand repel and the right hand invite, not like Elisha who repulsed Gehazi with both hands, and not like R. Jehoshua ben Perachiah who repulsed Yeshu with both hands” (b. Sanh 107b).

The Talmudic accusations against Yeshu are that he made himself God, that he practiced magic, that he “worshipped a brick,” and that he led Israel astray. These, together with his excommunication and execution, show that Yeshu was no longer considered Jewish, a “Jew.” (The name Balaam, incidentally, means “Not of the People”—Zindler.) In these posts I have suggested that, while in Alexandria, the young prophet became acquainted with Buddhism—which I view as a ‘pure’ form of gnosticism. The Buddhist connection appears quite clear to me because the subsequent teachings attributed to Jesus in the gospels and elsewhere (apocryphal Christian writings, etc) betray numerous and strong Buddhist parallels as presented in my Buddhist and Christian Parallels (online).

In the preceding post I pointed out that the name “Yeshu ha-Notsri” is not a birthname. It is an ascription, in this case given by the Talmudic rabbis. Yeshu derives from the root yod-shin-ayin meaning “salvation,” while notsri derives from the root nun-tsade-rish, meaning “watch, guard, keep, preserve” (including “keep hidden,” BDB 665 f). In other words, Yeshu ha-Notsri can mean “Salvation the Watcher,” or some such.

At left is a Buddhist “book” on strips of palm leaves, bound with string through two holes. The Buddhist sutra (“discourse”) at right is on thin slices of wood (possibly bamboo). The pages are kept on top of each other by thin sticks, which go through two little holes in scripture.
When not used, the scripture is covered in cloth and kept in the box.

Also in the preceding posts I noted the Samaritan chronicle of Abu’l Fath. It relates a good deal about a certain Dositheus, who also came out of Egypt, taught a strange doctrine which involved dipping into water ( = gnosis), and that he had writings written on palm leaves (Bowman 166)—a clear link to distant India, where Buddhist sutras were written on palm leaves. According to the medieval Abu’l Fath, Dositheus was hunted down by the High Priest Akbon and executed. While G.R.S. Mead also claimed “Aboulfatah places Dositheus 100 years B.C.” (Fragments of a Faith Forgotten, p. 163), I have been unable to verify this provocative claim, unless we interpret “Akbon” as the High Priest Hyrcanus II (a seductive possibility), who was active towards the middle of I BCE. In an unrelated tradition, the Pseudo-Clementine literature (Hom 2.24) also confirms that Dositheus came out of Egypt and relates a good deal about his activity in relation to the disciples of John the Baptist. For these and various other reasons, I conclude that Dositheus was none other than the talmudic Yeshu ha-Notsri.

The identity of Yeshu and Dositheus, however, is only one important step along the path towards unraveling Christian origins. I pointed out in the preceding post that, etymologically, “Jonathan” and “Dositheus” are equivalent—both mean “Gift of God” (Semitic, Greek). Much of the confusion in the ancient accounts between whose disciples went to whom (those of Dositheus, Simon Magus, Jesus, and John the Baptist) in various traditions is dispelled by drawing an equivalence between Dositheus and John the Baptist. Further reasons can be given for this equivalence (such as that both Dositheus and John particularly insisted upon spiritual purification by immersion in water) which, hopefully, I will detail in future.

Finally, in the preceding post, I also presented the equivalence between John the Baptist and Simon Magus—this based upon the semitic root a-m-d. The word amad in Aramaic means “go down, plunge, immerse, baptize” (Payne-Smith 416). In Jewish scripture, however, the word means “stand, be firm” (BDB 763), with the primary OT usage described in a prior post: “worthy of standing before the Lord” (i.e., proven, innocent, free of guilt). The linguistic equivalence between baptizing and standing has particular relevance in regards to John “the Baptist” and Simon “the Standing One”. Both baptizing and standing will prove to be two important concepts in early Christianity.

We recall that, according the Pseudo-Clementine account, Simon Magus is supposed to take over John the Baptist’s disciples upon the latter’s death, but Dositheus temporarily usurps that position. In the canonical Christian tradition, many of John’s disciples go over to Jesus and, at the same time, many people (including King Herod!) think that Jesus is John raised from the dead. In my opinion, all this overlap in discipleship and biography, combined with the linguistic and theological equivalences raised above, ineluctably show that all of these figures are really one.

We now begin to explore the ramifications of the above discoveries. The previous series of fifteen posts (“Yeshu ha-Notsri as the Founder of Christianity”) is by way of introduction. I doubt it will be possible to understand my projected upcoming posts (still on the drawing board) unless one has first read and digested the material in the first series. The traditional Christian just ‘dropping in,’ as it were, will be quite lost. And so will any reader who has not first gone through the ‘undergraduate course’ of the first series of posts. However, the preceding paragraphs in this very post provide a quick review of that undergraduate course.

If one accepts that Yeshu ha-Notsri = Dositheus = John the Baptist = Simon Magus, as I do, then an entirely new view of Christian origins emerges. In this light, it would seem that Yeshu ha-Notsri (I will call him by that name for the present) was the catalyst for the formation of many, many groups in the Levant around the turn of the era. A chart follows that presents the general lines of development. Two great streams of religious tradition combined in Yeshu ha-Notsri: the stream of Judaism, and the stream of Buddhism. This combination was unique, potent, and extremely productive. 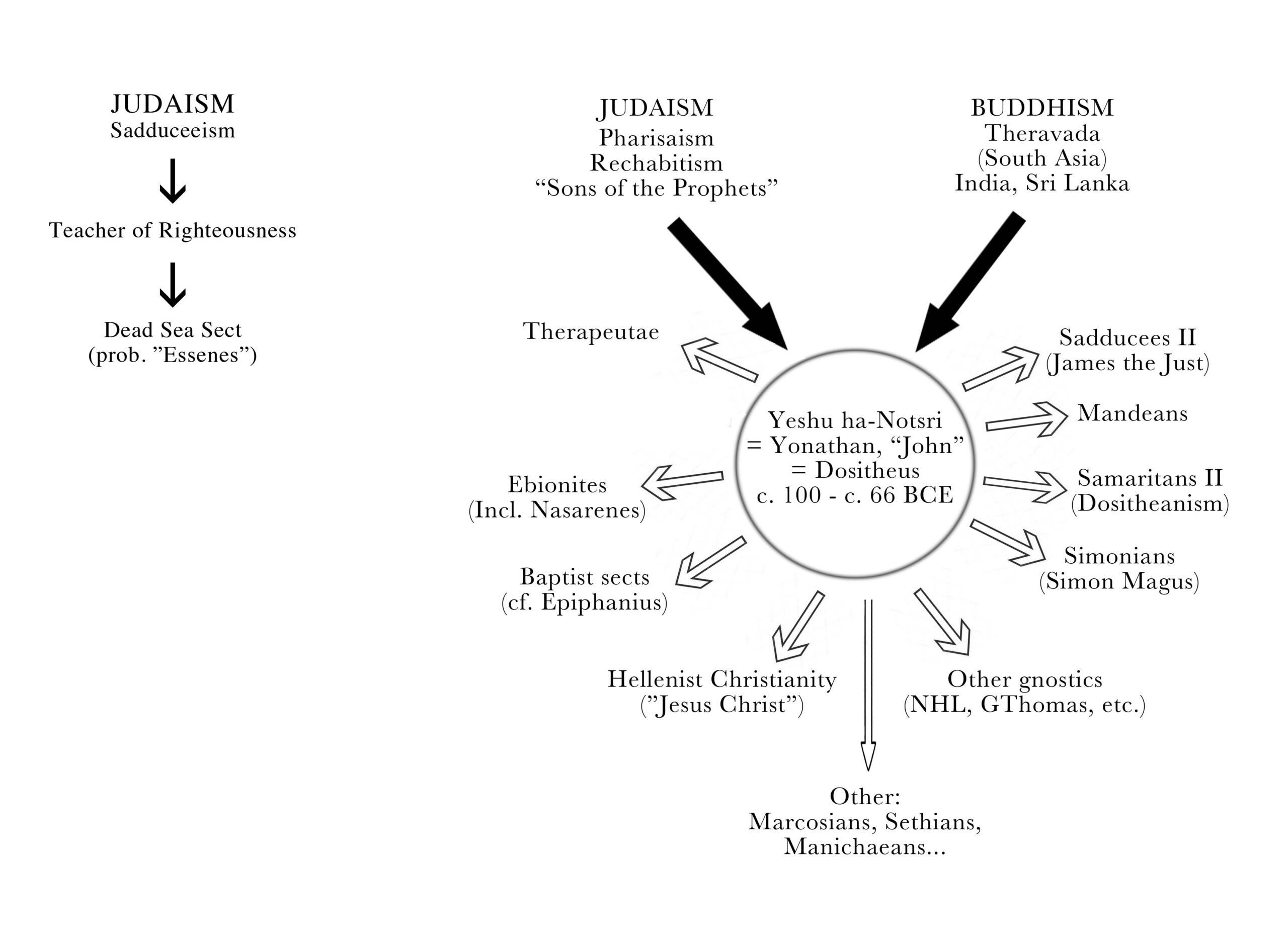 A new account of Christian origins, in schematic form (provisional)

We can now begin to identify the original theology that underlies all these figures. We can also flesh out the biography of that remarkable prophet who was the source of a great many movements long considered unaffiliated but that were in fact siblings, offshoots of one and the same parent. Like a precious crystal shattering into many parts, numerous apparently disparate movements came from the same original ministry. Each fragment of the crystal preserves an aspect of that ministry, an aspect of the ‘truth.’

Historically, each tradition has been treated separately—Mandeans (disciples of John the Baptist), Dositheans/Samaritans, Ebionites/Baptists, Pauline Christians. This is possible to do after the traditions diverge. If, however, the traditions have a common ancestor, then in the earliest stages they must be viewed synoptically. Academe and Church have not been able to do this, because they will not admit to links between these groups. After all, that would be heresy.

An important chronological point: we can now appreciate that the earliest stage of Christianity goes back not to the turn of the era but three generations earlier, to about 65 BCE (the ministry of Yeshu/John). For our purposes, the Roman invasion of Palestine in 63 BCE is the watershed event that separates the time of the prophet (apparently executed in the mid-60s BCE) from the first generation of disciples.

This new, earlier, chronology permits the inclusion into early ‘Christian’ history of many heretofore excluded movements, including the sect by the Dead Sea (DSS), the Therapeutae of Alexandria (Philo), the pre-Christian Nasarenes (Epiphanius), and the ‘pre-Christian’ Mandeans (Bultman, Lidzbarski)—to name only some obvious possibilities.

Hence, in the upcoming posts, I freely consult from the literature of all these long marginalized groups. They have a great deal to teach us about earliest Christianity.