The aristocratic young Pharisee—Yeshu ha-Notsri to the later Rabbinical scholars—stood on firm religious shoulders, on hallowed tradition already ordered, analyzed, codified, and even memorized. The problem for him and for his early followers was that the tradition upon which Yeshu stood was emphatically not the tradition of his forefathers. It was, simply put, not the Mosaic tradition so foundational to the chauvinistic and exclusive Jewish religion, to its culture, and to its self-identity. Not to Yahweh, not to Moses, not even to Jewish scripture—after his conversion to Buddhism Yeshu was pointing to a very different source of salvation. The Buddhists call that source nirvana (literally “extinguishing”), or “enlightenment.” In the West, this is known as gnosis.

As mentioned before, the Talmud associates Yeshu with the ‘government’ (malkuth) of Israel. I will try to pin down his exact relation to the ruling family of Israel (and thus his identity) in a future post. But I don’t doubt the clues given by the ancient sources that he was a very important person. For now, we note that Yeshu was excommunicated for his beliefs and teachings. In Yeshu’s case, and despite his enviable religious, social, and political links, there was obviously no middle ground. Judaism reflexively vomited him up as one might vomit up poisoned food.

In Yeshu’s generation the Pharisees were just on the verge of taking control of the government. They were powerful enough to incite wars and rebellion (against Janneus, for example). Being in the ascendant, phariseeism was in no mood to appease an upstart, someone who was obviously marching to an entirely different drummer. This dynamic allows us to understand the religious forces that produced, for example, the Essenes. In the view of myself and some other scholars (e.g. K. Atkinson 2018:13), they came into existence towards the middle of I BCE (some of Josephus’ chronologically dislocated statements notwithstanding). I personally maintain that the Dead Sea Sect was essentially a Jewish reaction against the gnosticism of Yeshu. But I’m getting ahead of myself. I will treat the Essenes (whom I consider linked to the Dead Sea Scrolls and also to the Ebionites) at another time.

As regards Buddhism’s arrival to the West (much overlooked today), the seminal event would have been Ashoka’s sending out of Buddhist missionaries in many directions, particularly to Alexandria. Ashoka’s Buddhist mission to the court of Ptolemy is described on one of the pillars the Indian monarch erected in his realm (see below). Thus, long before Yeshu was born, the teachings of Buddhism were on the ground in Egypt.

The actual event in the mid-third century BCE is all but forgotten, remarked by hardly anyone today or in the past. Nevertheless, the arrival of Buddhist monks from India was surely one of the greatest events in world history—at least, if one considers religion as an expression of the ultimate, of man’s quest for meaning and purpose. The historian Arnold Toynbee agrees with this estimation: “Future historians will consider the meeting of Buddhism and Christianity at their deepest levels as the most important single event of this century.” Of this century?! Toynbee was referring to the contemporary meeting of East and West in scholarship (his words were written in 1960). But the latter day ‘academic’ meeting of Buddhism and Christianity pales beside the event itself, which took place about 250 BCE. 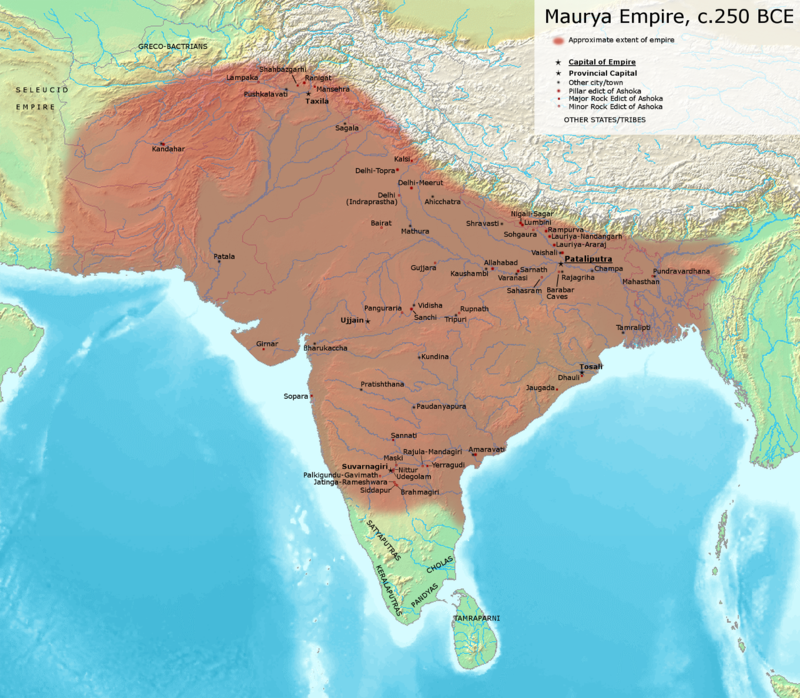 The Empire of Ashoka the Great

At that time, the Greek Ptolemy II Philadelphus was Pharoah of Egypt and Emperor Ashoka ruled over India. Both monarchs were rather exceptional beings. The Indian ‘Alexander the Great,’ Ashoka conquered the greater part of India and all contiguous regions. Eventually, however, he found himself massacring entire populations that he didn’t know—and also for reasons that he didn’t know.

After one particularly frightful campaign in which Ashoka exterminated over 100,000 Kalingas and deported the remnant, he suddenly converted to Buddhism, put away the sword, and became a pacifist. Ashoka the Great, as he is often called, realized that the Sage of the Sakyas (the Buddha) had been right: hatred ceases not by hatred, but only by love (Dhammapada 5).

Ashoka’s conversion to Buddhism was one step in a long chain of events—perhaps an inevitable chain of events—that eventually led a prophet in Palestine to perplex his listeners with a strikingly Buddhist and manifestly un-Jewish teaching: “Love your enemies, do good to those who hate you, bless those who curse you, pray for those who abuse you. To him who strikes you on the cheek, offer the other also, and from him who takes away your coat, do not withhold even your shirt” (Lk 6:27–29).

In stark contrast to his previous murderous efficiency, Ashoka’s new-found pacifism, frugality, and charity became legendary. He set up hospitals along the thoroughfares of his vast kingdom, way stations for weary travelers and even for sick animals. He promoted tolerance and admitted all religions with equal respect. The emperor also set up pillars of stone throughout his kingdom. He inscribed them with the Dharma, that is, with the teachings of the Buddha. Ashoka spared no effort, no expense, to promote the religion he now held dear.

The Pharaoh Ptolemy Philadelphus also merits the epithet “the Great” but was of a very different character—ebullient, intellectual, perceptive, flamboyant… Philadelphus was a strange mixture of the profound and the superficial. He appreciated quality yet had a demonstrable weakness for the cheapest expressions of exoticism. In modern parlance, he ‘liked to party.’ Ptolemy was a bon vivant, expansive, extravagant, with limitless ambition to make Egypt first in the world—and, of course, to make himself first in Egypt. The following gives the flavor for the sort of person he was:

A festival, called the Ptolemaia, was held in Ptolemy I’s honor at Alexandria every four years from 279/278 BC. The festival provided an opportunity for Ptolemy II to showcase the splendor, wealth, and reach of the Ptolemaic empire. One of the Ptolemaia festivals from the 270s BC was described by the historian Callixenus of Rhodes and part of his account survives, giving a sense of the enormous scale of the event. The festival included a feast for 130 people in a vast royal pavilion and athletic competitions. The highlight was a Grand Procession, composed of a number of individual processions in honor of each of the gods, beginning with the Morning Star, followed by the Theoi Soteres, and culminating with the Evening Star. The procession for Dionysus alone contained dozens of festival floats, each pulled by hundreds of people, including a four-meter high statue of Dionysus himself, several vast wine-sacks and wine krateres, a range of tableaux of mythological or allegorical scenes, many with automata, and hundreds of people dressed in costume as satyrs, sileni, and maenads. Twenty-four chariots drawn by elephants were followed by a procession of lions, leopards, panthers, camels, antelopes, wild asses, ostriches, a bear, a giraffe and a rhinoceros. Most of the animals were in pairs – as many as eight pairs of ostriches – and although the ordinary chariots were likely led by a single elephant, others which carried a 7-foot-tall golden statue may have been led by four. At the end of the whole procession marched a military force numbering 57,600 infantry and 23,200 cavalry. Over 2,000 talents were distributed to attendees as largesse.

On a more serious note, Ptolemy II expanded (or perhaps even founded) the famous Library at Alexandria. He turned it into the first institution of its kind, not just a repository for writings but also an unrivaled educational institution and cultural center (the Museion) with over one thousand resident scholars (including Archemides and Euclid), all supported by the state. Though probably apocryphal, legend has it that Ptolemy allowed no ship to dock in Alexandria without first handing over new texts for its library. It was at the Museion that, in all likelihood, the Septuagint was translated from Hebrew into Greek, this also during the period we are considering, c. 250 BCE. Incidentally, the young Yeshu must have lived near the Museion during the years of his Alexandrian exile, for the Jewish quarter of that city is in the very same neighborhood (see here).

We know that Emperor Ashoka and Ptolemy were in contact (→  here). These two curious monarchs exchanged embassies from a great distance, and one flattered the other with unusual and expensive gifts. Ptolemy received elephants, peacocks, tigers, and other animals for his Ptolemaiai, as well as spices and silk (from China), while Ashoka received costly perfumes, papyrus scrolls, camels, gorillas, nubian musicians, and perhaps some pithoi of the best Egyptian beer and Judean wine.

But these overtures were preliminary to the real embassy that Ashoka had in mind—sharing the Buddha’s message (the Dharma/Dhamma, the Buddhavacana, literally “Buddha-speech”).

The sea voyage from India to Egypt took many months one way and hugged the coastline. Only later, in the first century BCE, did ships begin to sail the open ocean using the trade winds (on this see the ancient maritime log, Periplus of the Erythraean Sea). In the third century BCE very few merchants or ships would have made the prohibitively long round trip between India and Egypt. Rather, the goods that were exchanged between these distant lands passed through a number of intermediaries, for neighboring ports en route were trading with each other continuously.

Embassies at the highest level, however, were different. These were official business and commanded express service, so to speak. We can imagine Ptolemy bragging to Ashoka about his great Museion, the ‘center of learning in all the world,’ together with its fabulous library. When asked by Ashoka what he desired from India, Ptolemy would certainly have indulged his favorite obsession, answering “literature for my library”! Of course, Ashoka would have enthusiastically responded to that request with his own fanatical obsession: Buddhist sutras (discourses, lit. “threads”)!

In order to facilitate trade with the East and South, Ptolemy laboriously reactivated the old canal system linking Lake Mareotis at Alexandria with the Nile River, and the river in turn with the Red Sea. This immense engineering and construction project occupied Ptolemy for years. When the new Egyptian canal system was finally complete, Ptolemy had a huge celebration, a Ptolemaion to end all Ptolemaiai, a three-day celebration of the new canal. And the crowning event of that incomparable celebration were very special gifts from the great Emperor Ashoka of faraway India.

[NOTE: Other posts on this website discussing Buddhist influence on Christianity are here and here.
See also the TAB at the top of every page “Buddhism & Christianity”.]