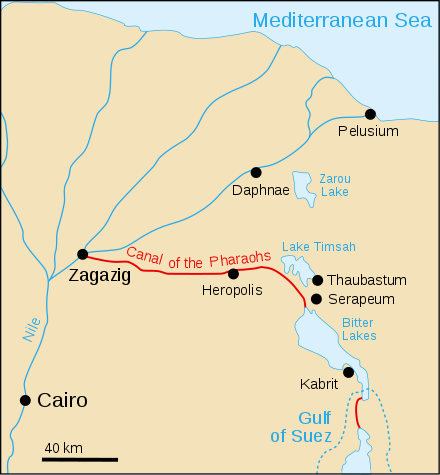 As we have read in the preceding post, in order to facilitate trade with the Far East and points south, the Macedonian Pharaoh Ptolemy Philadelphus laboriously reactivated the old canal system linking Lake Mareotis at Alexandria with the Nile River, and the river in turn with the Red Sea. This immense engineering and construction project occupied Ptolemy for years. When the new Egyptian canal system was finally complete, towards the middle of the third century BCE, Ptolemy probably had a huge celebration, a Ptolemaion to end all Ptolemaiai, a three-day celebration of the new canal. And the crowning event of that incomparable celebration were very special gifts from the great Emperor Ashoka of faraway India.

[NOTE: The following recreation of events uses considerable authorial license. No one today was there, and so we can’t know for sure how the Buddhst sutras came to the West. The following is one possibility…]

At Emperor Ashoka’s capital, Pataliputra on the Ganges (not far from where the Buddha roamed), the Buddhist missions to foreign lands were carefully planned in conjunction with the religious establishment (sangha). For Ptolemy’s library in Alexandria, the entire Buddhist canon (well over one hundred manuscripts) would have been freshly copied out on palm leaves and bound into ‘books’—a task requiring twenty scribes over a month to execute.

The greatest challenge, however, was selecting monks to go on these improbable missions to faraway lands, missions into the complete unknown with no likelihood of return. Ships were small, and Emperor Ashoka would perhaps have selected about six monks for his Buddhist mission to Egypt. Each monk would have been physically fit and travel-worthy, experienced yet not old, and above all accomplished in the Dharma (teaching)—able to represent the best that Buddhism can offer. In a sense, each monk would represent the Buddha himself.

The ability to memorize sutras and to recite them by heart was a key test of a monk’s proficiency. The lead monk would have had the entire canon memorized—every single Buddhist scripture that was committed to writing. This is not hyperbole, for such command of memory has been recorded in the Buddhist tradition for millenia and is also well documented in ancient times. The other monks, however, would probably each have commanded selected sutras (discourses of the Buddha). Each would have been capable of teaching them without aid and would have been able to write them down anew if necessary. Of course, the most important sutras were memorized by all the monks, including for example the Kamala Sutra (on finding one’s own way, also known as the Kesaputiyasutta), the Metta Sutra (on loving the entire cosmos), and the Fire Sermon (on purifying the six senses).

Alexandria was the most cosmopolitan city in the world at the time, more prestigious than Rome (whose time had not yet come). No doubt Ashoka planned an especially impressive embassy for the extravagant and curious Ptolemy, an embassy that befitted the holy sutras he was sending West.

We can imagine the event on a fine day 2,270 years ago. Six Buddhist monks trained in austerity, self-control, mindfulness, and silence were arriving by canal to Alexandria, Egypt, after a grueling half-year voyage. Accompanying them was their precious cargo—trunks loaded with Buddhist palm leaf manuscripts.

Awaiting their arrival at dockside, with more than ordinary pomp, the Ptolemaieia would have been in full swing—perhaps already in its second or third day. The extravagant Pharaoh Ptolemy II Philadelphus, who liked a good party, would be surrounded by his court feasting on the dais while regaling the crowd with free food, wine, and an apparently endless series of colorful processions including acrobats, dancers, exotic performers of every description, drummers, pipers and other musicians, fire-breathers, contortionists, jugglers, leashed and caged elephants, bears, lions, tigers, giraffes, peacocks, gorillas, sundry captives, and anything else that would keep the crowd entertained.

The rumor excitedly filtered through the crowd: “A ship is coming!”

Ptolemy rose, deliberately clapped his hands three times, then raised his arms and with a loud voice commanded, “Clear the dock! Make way for the ship from my beloved friend Ashoka, Emperor of India and of all the East!” But the crowd wasn’t listening. It had suddenly exploded into loud drumming, incoherent dancing, and general revelry.

Ptolemy turned to his adjutant. “Okay. Pull all the wine and all the beer. Right now!” The adjutant quickly directed several squads of soldiers to infiltrate the crowd and confiscate all jugs of wine and beer. “And if anybody doesn’t like it,” the Pharaoh called after the adjutant, “throw him into the canal to cool off!”

He turned to his mistress Bilistiche with a smile. “Why not?” she said simply, and then added: “Well, you can’t blame them. After all, they’ve been waiting three whole days for this.”

The Pharaoh knew that a special shipment of Buddhists and religious texts was arriving, and that the monks and interpreter on board had been hand-picked by Ashoka himself. “Treat them kindly but modestly,” Ashoka had written, “and above all, listen to them.”

Ptolemy surveyed the general mayhem and realized that the present welcome at the dockside was hardly fitting for a solemn religious event. The realization suddenly caused him great irritation. The pharaoh turned again to his adjutant and sharply ordered, “Clear the way to the dock. Put down the red carpet. And line it on both sides with soldiers.”

Confusion in the procession, which was still attempting to pass, ensued as soldiers cleared a way to the dock. Some slaves rolled out a thin red carpet extending from the dais to the water’s edge. Soon members of the elite palace guard took up positions on both sides of the red carpet. Now cut in two, the procession started to back up on one side, with yelling coming from afar: “Hey, clear the way!” “What’s the problem up there, you schmucks?” A leashed gorilla almost fell into the canal, and a rogue peacock ran onto the dais and past the Pharaoh.

When the trireme nosed around the bend the incoherent drumming became a rhythmic, steady beat. Pipers took up a rehearsed welcome song. The formalities did not calm the crowd but seemed to enervate it even more. People crowded closer to the dock and quite forgot to tend their animals. A group of dancing girls suddenly started gyrating and singing, twirling around with timbrels and ribbons. The Pharaoh signaled to his adjutant to stop them and a squad of soldiers soon approached the women who, however, quickly melted into the crowd. Ptolemy turned to Bilistiche. “What a mess!” he muttered.

She looked at him with one eyebrow raised and then back at the crowd. “It’s life,” she eventually observed with a shrug.

The ship finally pulled up to the dock. The oarsmen retracted their oars, ropesmen fastened the boat to land, and the gangplank was attached. The crowd was now clapping in rhythm to the drums and the dancing girls had resumed in a different area. Ptolemy resolved to maintain as much dignity as possible and stood stoically on the dais, arms folded.

Suddenly, as if out of nowhere, a bald head appeared above the gangplank. The face was calm, welcoming, slightly smiling, with friendly eyes cast downwards. Then the torso appeared, one shoulder bare, the other covered by the fringe of a saffron robe. A tall, middle-aged man soon stood motionless at the top of the gangplank, his palms clasped together, a saintly figure that seemed to tower over the crowd and to be miraculously suspended in mid-air.

The crowd suddenly quietened, the dancers became still, and the drumming also petered out. An uncanny hush gripped the entire proceeding—a “Buddha-calm.” Every eye fixed on that strange, bald, saffron-robed being. The Pharaoh stiffened, stared, and gulped.

Palms together, the monk descended the gangplank slowly and deliberately. He placed one foot on dry ground, then the other, and immediately went on both knees, touching his forehead to the ground. He remained in that position for what seemed like a long time, then stood up and turned. As he faced the boat, a second monk appeared and the crowd gasped.

He was young, similarly bald and clothed in a saffron robe. This monk cradled a box in his arms as a mother would cradle a baby. Also looking downwards, he descended the gangplank and gave the palm-leaf manuscripts to the lead monk. Then he went to his knees and similarly touched his forehead to the ground.

The Pharaoh descended from the dais and approached the lead monk. With palms upturned Ptolemy solemnly held out his hands, as one might indeed receive a baby. The monk slowly placed the precious manuscripts in the monarch’s hands.

“Thank you,” the Pharaoh said. “Thank you for coming so far for a mere wretch like me.”

Ptolemy returned to the dais and four more monks appeared from the boat in turn, each with more manuscripts. Finally the interpreter appeared, a Bengali who knew Greek. He approached the Pharaoh and said, “I am the interpreter. We come with warmest greetings from Emperor Ashoka, and with the teachings of the Buddha. We are now in your gracious hands. Do with us what you will.”