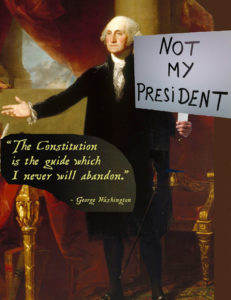 I am now happily retiring the George Washington picture that has been a fixture on this blog since November 2016 (at right). It was of course Photoshopped—the sign “Not my President” is the very sign that I made and held aloft on the street corner for weeks after Trump’s stolen election four years ago (yes, Hillary really won, as former President Jimmy Carter rightly opined). I recall that Christmas when I dressed up as Santa Claus and held that sign at one of the busiest intersections in town. Well, that was not such a Merry Christmas.

This Christmas will be a little merrier. Like many of you, I am (finally) breathing a sigh of relief… It’s been a long four years. For the time being, democracy in the U.S. has survived—but only barely. Folks, we came THAT close to losing the baby with the bathwater. I think most of you realize that, regardless of where on this planet you’re reading these words.

Today (Nov. 23, 2020) the Michigan Board of State Canvassers certified Biden’s win in that critical state. In the surreal dystopia that has reigned in this country since Trump took office four years ago, even that fairly straightforward decision was not certain. Amid astonishing rumors that Venezuelan Chavistas had massively sabotaged the U.S. election in favor of the Democrats, one of the four canvassers, an ultra-Trumpista himself, abstained. The remaining two Democrats and one Republican honored the clear verdict of Michigan voters (who, after all, gave Biden 154 thousand more votes than Trump). Whew.

With that innocuous board decision the dam effectively broke. Within a matter of hours the White House ended its unprecedented blockade of the General Services Administration, finally allowing access by the incoming Biden administration to the levers of its future power.

Of course, this self-dealing Machiavelli remains in the White House another two long months. He still has access to ‘the button.’ And he has 57 more days in which to create who-knows-what mayhem. I learned long ago not to underestimate Trump’s incredibly unrestrained diabolical instincts. We may still be in for a surprise or two. Some people, when cornered, threaten to burn the house down unless they get their way. The consummately transactional Donald may be one of those people. In taking office, he vowed to protect, serve, and defend the people of the United States and the Constitution. He cares not a whit for either. A case in point is his mishandling of Covid-19, which in my opinion amounts to genocide with 258,000 American deaths (probably an undercount) to date. Sure, give him credit for Operation Warp Speed in developing a super-fast vaccine. But don’t think he did this to save ordinary lives (which, in Trumpworld, are expendable). He did it to save Wall Street and the one percent (see below).

Trump’s post-White House future is bleak. Even if he gains a pardon for all possible federal offenses, the 74-year old faces unending litigation in state courts (particularly New York) on a host of offenses. His taxes will eventually become public and they will probably reveal money laundering, Russian Mafia ties, and… who knows? The private citizen could realistically face considerable jail time. A month ago The Donald speculated that “If I lose, I may have to leave the country.” He may not have been joking.

My diagnosis and prognosis

Donald Trump is both cause and effect. A sociopath, his tenure in the White House has exacerbated underlying weaknesses in American democracy. Those weaknesses enabled his election and have been growing for decades—some would say since Ronald Reagan’s conservative, shoot-from-the-hip, union-busting tenure. Economists tell us that, since the 1980s, the gap between rich and poor has grown formidably. In fact, I consider this the single greatest threat to any democracy. For when money (which, after all, is power) becomes super-concentrated in the hands of a few, then democracy is no longer possible. Period.

The American middle class has been shrinking for some time and is hurting. This is one reason Trump came to power—because the ‘system’ (capitalism, democracy, or whatever we wish to call it) has not been working for ordinary Americans since the turn of the millennium. Upward mobility (the “American dream”) scarcely exists: college is out of reach for most, as also is owning a house, and the vast majority of jobs now are at or near minimum wage. Americans have became desperate, have turned to drugs by the millions, and have looked for a savior. Enter Trump the media-maestro and snake oil charmer.

At the same time, the one-percenters who benefited from the enormous upward movement of wealth embraced Donald Trump—his conservative, anti-democratic tendencies are ideally suited to maintain their monopoly and keep the 99% virtually helpless. Thus, the phenomenon of Trump represents a unique fusion of two powerful groups: the moneyed oligarchy and the frustrated, now dispossessed middle class. This unlikely fusion is why Trump was able to win in 2016 (though Hillary really won—but that’s another story), why he gave $1.5 trillion of taxpayer money to wealthy corporations and banks, and why he cavalierly allowed a quarter million ordinary Americans to die from covid-19.

Unless the United States redresses its stark inequality in wealth, I fear that the Biden administration represents American democracy’s last gasp. The dysfunctional society we live in cannot endure much longer. It does not work for the majority of citizens. Biden has four short years to change the direction of our country and to once again give ordinary people hope—especially to the younger generation that didn’t deserve any of this and that, for the first time in American history, has a lesser standard of living than its parents.

It’s a tall order. Biden has promised to tax the wealthy, and he says many of the right things. Let’s hope he can deliver.

The terrible homeless crisis in this country began with George Bush’s presidency in the year 2000. Twenty years later, homeless people are everywhere in my hometown of Eugene, Oregon. On my daily walk I now routinely take a few extra dollars to give out. Last week there was a particularly helpless elderly woman, her shopping cart overflowing, cowering behind a bush in the bitter cold. “Are you planning on spending the night out here?” I asked. “I guess,” she answered matter-of-factly. I gave her some money and called CAHOOTS, a local aid agency. Yesterday it was a young black man standing in the driving rain. I almost didn’t notice him because it was already quite dark. “Could you use a few bucks?” I asked. “Yeah.”

There’s not much an ordinary citizen can do. But President Biden could be the right man for these troubled times. I will do my little part, and I will place high hopes in the incoming president. But even after Trump is gone, democracy’s continued health is not assured. Its survival in the U.S.A. will depend on us all.

[ → My politics posts on this blog four years ago, when Trump was elected.]