“At Alexandria [before c. 200 CE] it was hard to differentiate between gnostic and Christian doctrines…”

The statement dates to 1986 and is by Robert M. Grant (d. 2014), the ‘dean’ of Early Christian History for a whole generation. Grant’s distinction between “gnostic” and “Christian” doctrines has been, and still is, typical of the field—and so wrong! By and large, the Gnostics considered themselves the true Christians:

…There is much evidence to show that in the Roman Empire, at least, the Manichaeans considered themselves to be Christians, nay, the true Christians, while they condemned the Catholics for “judaizing,” and hence for being unfaithful to the true doctrine of Christ.     [G. Stroumsa, in: The Roots of Egyptian Christianity, 1986, p. 308]

Had I been one of Grant’s students (I met him once, in fact), I might have impertinently asked him in one of his august seminars: “But, Professor Grant, was not early Christianity itself a form of Gnosticism?”

And that, I suppose, would have been the end of my academic career.

Grant wrote entire books based on the above fallacy. One is entitled Gnosticism and [note the distinction!] Early Christianity (1959). Another title of his is unambiguously pejorative: Gnosticism: A Source Book of Heretical [!] Writings. College and church simply loved his writings, published anything that came from his pen, and made Grant the “Carl Darling Buck Professor of Humanities and of New Testament and Early Christianity at the University of Chicago.” (Whew.)

Moving right along… There’s little a lone voice such as mine can do to correct two millennia of misinformation. So, I’ll just offer an analogy—a parable, if you will: Christianity is like a ship loaded with precious cargo that left a port called “Gnosticism” long ago. As soon as the ship got away from land a group of cutthoats onboard mutinied, threw the crew overboard, changed the ship’s flags, and determined never to return to the port from which they came but to enrich themselves by selling the ship’s cargo to anyone who would buy it.

That is the history of Christianity, in a nutshell.

And here’s an interpretation: the “cutthoats” are the Church Fathers and ancient prelates, the bloodthirsty inquisitioners of the Middle Ages, and the megapastors, church leaders, and academic sycophants of Christian orthodoxy today; the “crew” are the pacifists of the first Christian centuries and thereafter, well-meaning but quite inept at managing a ship; the “changing of the ship’s flags” is lowering the flag of Understanding and raising the flag of Pleasure; the “mutiny” is the invention of Jesus of Nazareth and the codification of the canonical gospels; the “selling of the cargo” is the weaponizing and then commercializing of Christianity throughout the Roman Empire and eventually throughout the world; and today’s buyers are the naive TV-watchers of The 700 Club and angry Christian conservatives who believe all hell must break out before Jesus Christ is able to return in glory on the clouds of heaven.

Unfortunately, things that begin poorly generally do not end well. Those who, so long ago, produced the Big Lie that is Jesus of Nazareth also produced an organization given over to power, profit, and perversion. It could not have been otherwise—“Jesus of Nazareth” is a mutation that occurred at the very origins of Christianity. That mutation has created a cancer, and that cancer is now metastasizing. The Big Lie seeded in mid-II CE has laid the groundwork for chaos in the western world. Burning down the house. All hell breaking loose. The ship that once left a peaceful port called “Gnosticism” and was hijacked by cutthroats is speeding straight towards an ugly port called “Destruction.”

The Buddha called that karma.

The religions that Christ has produced all accuse one another of lying;
They accuse one another of lying and don’t share a single confession;
They don’t share a single confession because they issued from the creation of a lie.
Christ changes the path that the First [Being] set;
He changes the path and brings folly into the world.
The folly that Christ has created will surely come to fruition on the day of the end.
[Mandean Ginza Rt; Lidzbarski pp. 134–35]

In the preceding post I presented a chart first produced in a book by the James A. Gray Distinguished Professor of Religious Studies at the University of North Carolina at Chapel Hill—sorry, I mean a book by Bart Ehrman—that purports to represent the rise of Christianity in the Roman Empire. The chart virtually omits any Christians before mid-II CE. Here I present the chart again, but now with those early (and there were many) “Gnostic” Christians included: 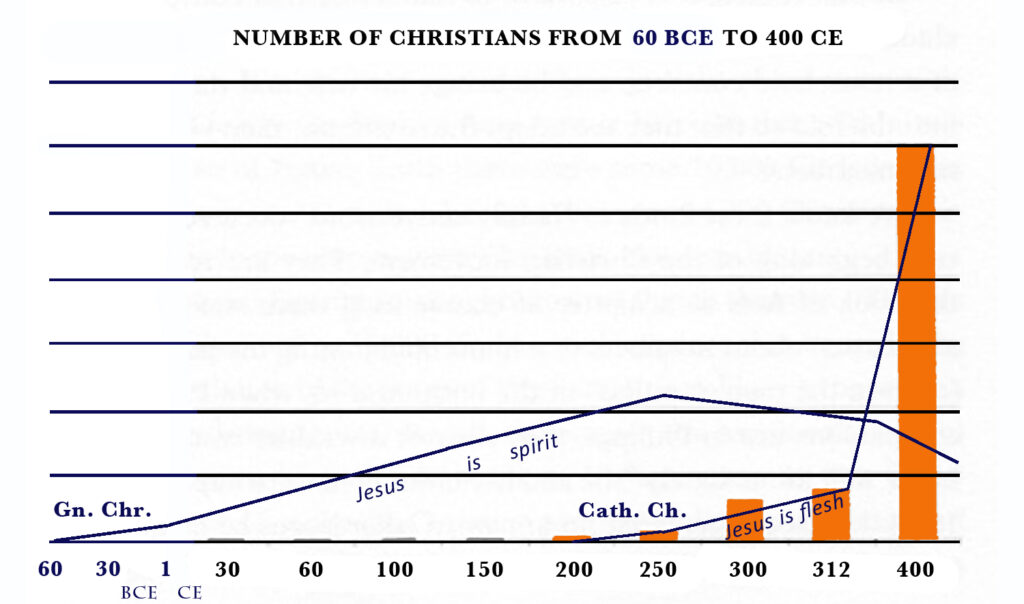 The reader will note with astonishment that the timescale at the bottom of the chart now extends back to 60 BCE. Indeed, this reflects my view that Christianity began a few short years after the execution of Yeshu ha-Nostri in the mid-60s BCE.

There are also two lines on the chart. The line to the left denotes Gnostic Christianity—completely ignored by Ehrman. The line is of course an approximation, and its actual height and shape are purely illustrative, not scientific—which is why I have also deleted numbers from the left side of the chart (which, for Ehrman, ranged from 5 million to 35 million Christians in the Roman Empire).

There are many ancient sources witnessing to Gnostic Christianity. They mostly come from the Church Fathers who, in furiously combating Gnosticism, did us the immense favor of establishing their varied existence and profusely describing them—albeit in highly negative and not always accurate terms. Then, too, we have some gnostic texts that survived the Church’s many purges—texts that correct the heresiologists’ skewed assessments and that reveal Gnosticism to have been early, adaptable, and widespread throughout the Levant. The demise of Gnosticism—as seen in the chart above—began in the third century when the Church gained strength in the civic arena. In the fourth century, after the conversion of Constantine the Great, the Church was finally strong enough to assume the offensive. It did so with relish and official sanction, hunting down gnostics—who were now “heretics”—and burning their books. Henceforth Gnosticism from Mandeism to Manichaeism to Dositheanism to Samaritanism (yes, that was once also a form of Gnosticism) was irrevocably on the decline. Many gnostic groups chose to flee the Roman Empire entirely for the eastern frontier.

Interestingly, the Manichaeans of the fourth and fifth centuries adopted a different strategy—they infiltrated the Catholic Church. G. Stroumsa writes:

…The Manichaeans, who had been outlawed and savagely repressed already by Diocletian at the turn of the fourth century, survived probably longer than is usually thought, since they were able to go underground in the most effective of ways: by keeping their faith secret and appearing to be, for all practical purposes, plain Christians…
At least some Manichaean electi… looked for a hiding-place in the ascetical communities in the [Egyptian] desert, i.e., in the Pachomian monasteries… The Codex Theodosianus [438 CE] mentions “Encratites” as one of the pseudonyms used by Manichees in hiding… Both Popes Gregory I and Gregory II felt obliged to issue warnings against accepting African priests entering Italy without investigation, since they might actually be Manichees…
Augustine [who himself was a convert from Manichaeism] mentions the case of a Catholic [monk] in his own diocese confessing to be a Manichaean catecumen. Elsewhere, he reports that a certain Victorinus, an old man and one of his subdeacons, was recognized as having been a Manichaean auditor for years and having taught Manichaean doctrine throughout his career in the church…
Eutychius reports that in Timotheus’s time [late IV CE], the two classes of Manichaeans, the electi and the auditores, were very numerous among Egyptian priests and monks. [He remarked] that “most of the metropolitans and bishops of Egypt were Manichaeans”… [G. Stroumsa, in: The Roots of Egyptian Christianity, 1986, pp. 308–13]

Gnosticism did not completely die out in the West. Bogomils, Paulicians, Cathars, Albigensians… The holy wars against “the pure ones” (that’s what Cathares means) were intermittent and hot. The cutthroats that commandeered the ship in the analogy above now tortured and then burned their betters at the stake. That, too, is the sordid history of Christianity.