Readers may not be aware that the traditional view of Marcion was my principal reason for fixing the authorship of the canonical gospels to the middle decades of the second century. However, in a recent post I proposed that Marcion was an invention of the Catholics, a useful tool in the fledgling church’s efforts to paint naysayers (those who rejected Jesus of Nazareth as the savior) as heretics (“Marcionites”). Now that ‘Marcion’ is gone, the dating of the 4G to the middle decades of II CE loses a good deal of force.

Here I briefly summarize the reasoning that originally led me to connect Marcion’s presence in Rome to the dating of the canonical gospels:

1) Marcion came to Rome about 140 CE with a large monetary donation for the Church. The money was first accepted but then returned. Marcion was excommunicated in 144 CE.
2) Marcion brought with him a ‘gospel’ (theology) that was thoroughly unacceptable to the incipient Catholics. His gospel included two gods, disparaged the creation as well as Judaism, and was essentially gnostic—proposing that escape from this world of matter was possible only through gnosis, self-negation, encratism, and the rejection of ordinary social and family ties.
3) It was in reaction to Marcion that the Catholics ‘rewrote’ his gospel, thus producing the Gospel of UrLuke ( = GMk). Then, the Catholics claimed that their gospel(s) came first and that Marcion and all those of his ilk were later heretics.

By the foregoing logic, then, the canonical gospels are to be dated from the middle of the second century.

With ‘Marcion’ gone, however, there is a little more leeway in dating the 4G. How can we find an alternate ‘anchor’ for the Gospel of Mark (which was, IMO, the first canonical gospel)? Let’s begin with a well-known quote from Tertullian, in his Against Marcion (Bk. IV.7):

Tertullian, writing about 207 CE, of course knew that Jesus’ ‘city’ was Nazareth, not Capernaum. So he writes in the next section of his book:

The Christ of the Creator had to be called a Nazarene according to prophecy; whence the Jews also designate us, on that very account, Nazarenes after Him. For we are they of whom it is written, “Her Nazarites were whiter than snow;” even they who were once defiled with the stains of sin, and darkened with the clouds of ignorance. But to Christ the title Nazarene was destined to become a suitable one, from the hiding-place of His infancy, for which He went down and dwelt at Nazareth, to escape from Archelaus the son of Herod. This fact I have not refrained from mentioning on this account, because it behooved Marcion’s Christ to have forborne all connection whatever with the domestic localities of the Creator’s Christ… (Against Marcion IV.8, emphasis added.)

Naturally, Tertullian identifies Jesus’ hometown as Nazareth. Nevertheless, I argued in my first book that the word “Nazareth” at Mk 1:9 is an interpolation:

The settlement is named only once in the Gospel of Mark, at 1:9 (other instances in the Greek text read Ιησου  Ναζαρηνε). The passage as it stands demonstrably conflicts with the remainder of the gospel, which locates Jesus’ home in Capernaum. (The Myth of Nazareth xiii)

So, what Tertullian reports about Marcion seems to agree with our earliest canonical gospel, Mark,  but to conflict with the information about Jesus’ hometown given in the other three gospels.

Now let’s consider the following passage by Irenaeus of Lyon, writing a generation earlier than Tertullian, that is, about 180 CE:

Wherefore, when Joseph was convinced beyond all doubt, he both did take Mary, and joyfully yielded obedience in regard to all the rest of the education of Christ, undertaking a journey into Egypt and back again, and then a removal to Nazareth. Those who knew not the Scriptures nor the promise of God, nor the dispensation of Christ, at last called him the father of the child. For this reason, too, did the Lord Himself read at Capernaum the prophecies of Isaiah: The Spirit of the Lord is upon Me, because He has anointed Me; to preach the Gospel to the poor has He sent Me, to heal the broken-hearted, to preach deliverance to the captives, and sight to the blind. At the same time, showing that it was He Himself who had been foretold by Isaiah the prophet, He said to them: This day is this Scripture fulfilled in your ears. (Irenaeus, Against Heresies IV.23.1, emphasis added.)

A couple of points can be noted:
(1) Irenaeus knows the flight of the Holy Family to Egypt, and the return to Nazareth—which occurs only in Matthew 2:13–15 & v. 23.
(2) Irenaeus knows the account of Jesus reading in the synagogue, an account that takes place only in the Gospel of Luke. But, according to Irenaeus that reading took place in Capernaum, not Nazareth.

What are we to make of this discrepancy? Long ago, on the internet forum CrossTalk 2, I pointed out that the evangelist Luke has a strident anti-Capernaum stance. Luke roundly curses Capernaum: “And you, Capernaum, will you be exalted to heaven? You shall be brought down to Hades” (Lk 10:15 // Mt 11:23). In a lengthy message (#3857, Dec. 2, 1998) I analyzed the account in Lk 4:16–30 as an expansion of Mk 6:1–6 and Mt. 13:53–58, passages where Jesus is unable to do many wonders “in his own country.” In Luke’s hands, any notion that Jesus hailed from Capernaum is quashed—not only does Luke curse Capernaum, but at Lk 4:24 (while in Nazareth!) Jesus famously says “No prophet is acceptable in his own country.”

We have here, then, evidence of the gospel story in flux—exactly what one would expect in the ‘Watch and Wait’ period of the later second century. The Nazareth synagogue account occurs only in Luke 4, subsequent to parallel accounts in Mark and Matthew, and sufficiently late that the passage had not yet taken final form when Irenaeus penned his Against Heresies.

Multiple lines of evidence thus show that Capernaum was—in the first gospel recension—the hometown of Jesus, and that Nazareth belongs to a second layer of Catholic tradition.

Irenaeus himself seems deeply implicated in all this. He is, as it were, writing ‘from both sides of the fence’ for he is represented in both layers of the Catholic tradition. Thus, one has to wonder whether Irenaeus was not himself the author of the pericope in Luke 4—or, at least, of its revision.

In a previous post I termed the half-century ca. 150–ca. 200 CE as a period of flux, a time when the gospels were brand new and indecision prevailed in Catholic circles over which gospel account was true. ‘Jesus of Nazareth’ and ‘Christ’ are hardly mentioned in that half century. In the former post I discussed these lacunae with reference to Ad Autolycum, a work dating to about 185 CE. Its author, Theophilus of Antioch, knows the 4G, but (in sixty pages of Greek) he doesn’t mention Jesus a single time! He doesn’t mention the virgin birth, the ministry, the apostles, the passion, the cross, the ascension… For the Bishop of Antioch, it is as if Jesus of Nazareth did not even exist. The historian Robert Grant observed that Bishop Theophilus’ “understanding of the work of Jesus Christ can be recovered only from allusions, for like other apologists of his time he never openly speaks of him” (emphasis added). I offered an explanation for this striking silence:

When the over-the-top figure, Jesus of Nazareth, arrived like a bombshell in four great, astonishing gospels in mid-II CE, Christians everywhere were awestruck. By and large they were quiet. For several decades, Christian apologists from Spain to Mesopotamia were very careful how they handled this radical new information, this stunning new Savior of the world. They looked, watched, and listened.

When were the canonical gospels written?

It is possible, from the foregoing, to see that finishing touches were still being put on the gospels in 180 CE. At that time, Irenaeus seems to know the gospels of Matthew and Luke—and, by implication, their predecessor, the Gospel of Mark. His verdict concerning the “four winds” shows that he also knew the Fourth Gospel.

According to the lists drawn up long ago by J. Hoh, in his Adversus Haereses Irenaeus quotes 626 times from all 4 Gospels.   But was the heresiologist himself putting ‘finishing touches’ on one or more of those gospels?

My impression is that the beginning of canonical gospel formation already signaled in these posts (“the 140s CE”) cannot be far wrong, even without ‘Marcion.’ If anything, with Irenaeus’ activity ca. 180 CE, that beginning moves later by a decade or so. In any case, I now view c. 180 CE as a provisional terminus ante quem for canonical gospel formation. That was certainly the date for ‘canonization’ of the Four Gospels by Irenaeus in his Adversus Haereses (see above).

As for the terminus post quem for the writing of the canonical gospels (which I consider equivalent to the writing of GMk), that can no longer be pegged to Marcion’s mythical activity in Rome in the 140s CE. We have no real anchor… However, Justin Martyr (d. ca. 165?) knows the gospel storyline, and thus by about the year 160 CE one or more of the synoptic gospels must have been known. 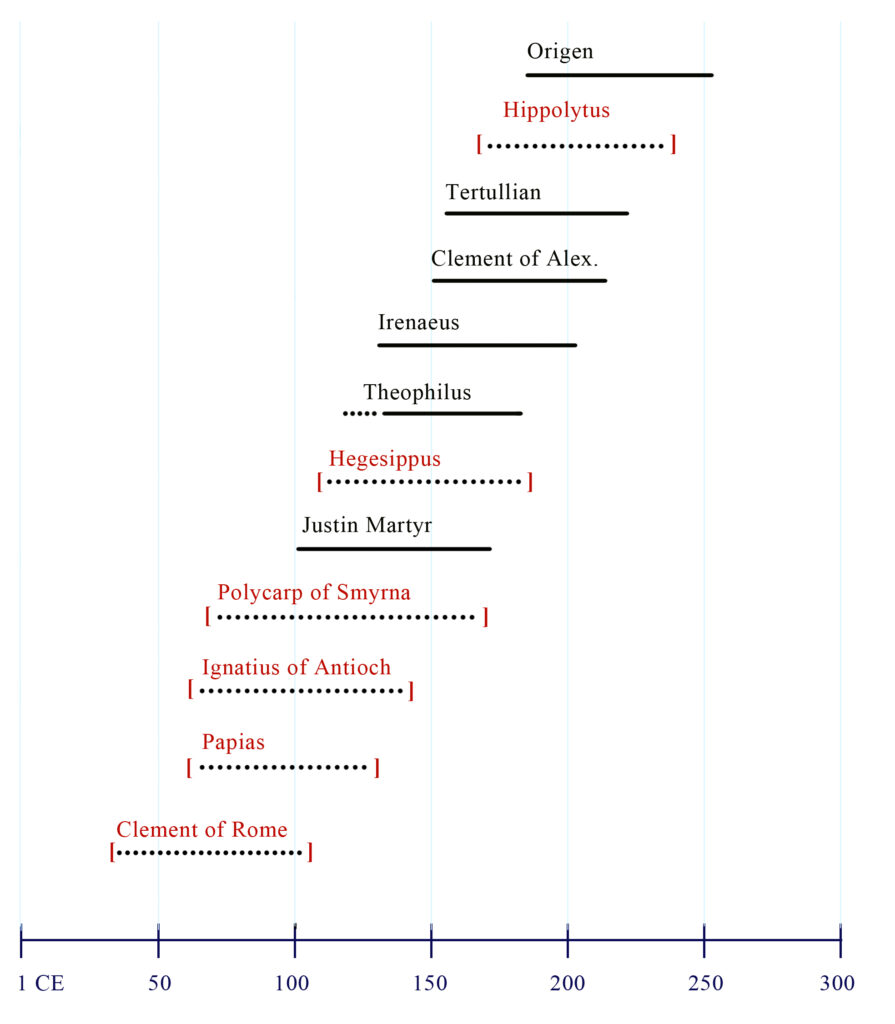 So, we have an incrementally more nuanced chronology for the formation of the canonical gospels:

Irenaeus of Lyon is the Church Father most associated with the second half of the second century. His role in the codification of the canon seems seminal. Surprisingly, only two writings survive from his pen: the Against Heresies (in a Latin translation—the original Greek is lost) and his Demonstration of the Apostolic Preaching (in an Armenian version). In the latter work Irenaeus sets out his views on Christ (beginning ¶62) which closely mirror the theology of both the canonical gospels and the Pauline epistles. The Pauline epistles, however, don’t know the biography of Jesus of Nazareth. (More correctly: they may know that biography but don’t express it due to the indecision still obtaining in the ‘Watch and Wait’ period—see comments below.) Irenaeus does express that biography, and he reviews it in detail—probably for the first time—and also links Jesus’ biography to the Old Testament.

As noted in another post, earlier Church Fathers such as Clement of Rome, Ignatius of Antioch, and Papias of Hierapolis are unattested save for writings imputed to them by later Fathers like Irenaeus. It is my opinion that Ignatius, Papias, and Clement were invented in order to bridge Irenaeus and later Fathers with canonical first century times–necessary to establish the Church’s unbroken authority going back to Jesus of Nazareth.

Besides having a hand in inventing earlier Church Fathers, Irenaeus constructed a second ladder of authenticity between himself and the apostles by claiming that he was a student of Polycarp (also invented?) who was himself a “hearer” of the Apostle John, the fourth evangelist (certainly invented).