A few nights ago I picked up Bart Ehrman’s book Lost Christianities: The Battles for Scripture and the Faiths We Never Knew (Oxford, 2003). I have been looking through some of his books of late—not for knowledge so much as to check the current heartbeat of American Christianity—which, unfortunately, is undergoing a frightful irregularity. On the one hand are informed Christians—those who read books, who care (at least a little) about facts, and who may have taken a religion class or two in college. They are the target of Ehrman’s more popular books. On the other hand are the legions of unschooled Christians for whom facts can be the work of the Devil and for whom the two testaments are still the absolute and literal Word of God—though not many of these Bible-thumpers have actually read the holy book(s) they so loudly tout. These two groups generally ignore one another, but if that is not possible they oppose one other in what is known as ‘the culture wars.’ The academics—who cater to fact-based Christians—know where the red lines are (for example, don’t say anybody in the New Testament didn’t exist), and the more intrepid among them (an Ehrman or a MacDonald) can even push the envelope—as long as they have tenure and a good publisher. For readers of this blog and for mythicists in general they aren’t really pushing the envelope at all but are merely covering territory analyzed by Baur, Drews, and the Dutch Radicals long ago.

Ehrman’s reputation rests mainly on pointing out, and fleshing out in several lengthy tomes, the allegation that Christians were sometimes forgers. Oh, for shame! In polite society the accusation is only whispered, and if Ehrman’s Misquoting Jesus, or The Orthodox Corruption of Scripture, or (God forbid) Forgery and Counterforgery: The Use of Literary Deceit in Early Christian Polemics happens to sit on the coffee table, the lady reaching for a cookie may look askance and gingerly ask the hostess, “You mean, Dolly, the Christians lied?”

I skipped to Ehrman’s chapter on Gnosticism, entitled Christians “In the Know”: The Worlds of Early Christian Gnosticism. But already in the second paragraph I had to pause. Ehrman writes:

The [Nag Hammadi] library contained a wide array of books… There were new Gospels recording Jesus’ words, some of them containing his secret and “truer” teaching, delivered after his resurrection from the dead, Gospels allegedly written by his disciples Philip and John the son of Zebedee, by this brother James, by his twin brother Thomas. Even though forged, these books…

Wait a minute! “Even though forged”? Right off the bat Ehrman is accusing the gnostics of being forgers. All of them.

Now, a forgery always comes after the authentic item. So, included in Ehrman’s statement is the implicit understanding that Gnosticism came after Catholicism. This is a sacred cow in Christianity—one of the red lines alluded to above. The critical battle of words over who came first goes way back to the early Christian centuries.

A few pages further on Ehrman seems to contradict himself:

Whatever one might say about this form of Christianity [i.e. Gnosticism], I don’t think we can call it insincere or wanting of feeling. It is warm and intense, full of joy and passion. [P. 129]

So, the gnostics were both sincere and forgers? Presumably, the reader is to conclude that the gnostics were sincere forgers. Whatever. But instead of attaching a label to them, maybe we should recognize the following simple fact: Gnosticism presented a different Christianity. And when there’s only room for one truth, that can be very threatening.

For their part, the Gnostics accused the Christians of forging texts—many of them. And the gnostics were right. After all, if Jesus of Nazareth did not exist, then most everything in Christianity is forged! The accusations hurled between Gnostics and Catholics in the early Christian centuries are on the level of two kids in a sandbox pointing fingers at one another and shouting “You lied!” “No, you lied!” “No, I told the truth!” “No, I did!”—and the two kids, of course, soon start fighting.

We should recognize that from its inception Catholicism has been on the hot seat. Because its foundation is untrue, it has engaged in coverup from the start. The coverup can never end, for as science and scholarly investigation reveal more and more ‘discrepancies,’ those discrepancies will require more coverups. The loop is endless and the Catholics brought it upon themselves beginning in the middle of the second century.

I have personally encountered this deceitful loop in my Nazareth research. For example, a trove of Hellenistic coins was suddenly ‘found’ within months after my first book appeared in 2008. Now, the various claims that sixteen Hellenistic coins were found at Mary’s Well in Nazareth constitute a forgery—something produced with the intent, at least on some level, to deceive. Here is the quick online definition of forge: “produce a copy or imitation of (a document, signature, banknote, or work or art) for the purpose of deception.” One Israeli archeologist actually itemized the sixteen coins in a catalog wherein all the data was invented (NazarethGate 303). In rebuttal, I simply quoted in my second book what the principal archeologist (Y. Alexandre) had written elsewhere, that the coins in question were dredged up from water channels built in Middle Roman times. Hence, the deposition of the coins could not have predated the water channels in which they were found.  Hellenistic coins there are impossible. Case closed.

In Christianity, unfortunately, the case is never closed. It’s like whack a mole—you take care of one problem and it simply surfaces somewhere else. What I’m getting at is that Christian forgery is systemic—it is continuous and unending because forgery is the only way the religion can survive.

The ancient accusations of forgery—so commonly invoked against Gnosticism by the Church Fathers (and by contemporary scholars like Ehrman)—demonstrate an innate defensiveness on the part of the religion. Consider the following facts:

There you have it: Gnosticism is a late forgery of the only true faith, Catholicism. What obtains today in church, in scholarship, and among the public is history in reverse.

The unending war against truth

When we understand that circa 144 CE gnosticism was everywhere and Catholicism was still nowhere (it was just on the verge of being created), then we can understand that the Goliath of Gnosticism was the first and enduring opponent that the fledgling Catholics had to conquer. It’s not surprising that paranoia, exaggeration, and shrillness characterize the writings of the Church Fathers. These are sure characteristics of an underdog fighting for survival by faking it.

The need to chronologically locate Catholicism before Gnosticism required that the savior figure Jesus of Nazareth, created in the 140s CE, be placed in a considerably earlier time. In turn, placing the Nazarene in the time of Tiberius Caesar necessitated ‘ladders of authenticity‘ linking the Church Fathers to that earlier time. Once we understand these dynamics, we have a grasp on the main lines shaping the very origins of Christianity:

– Christianity came out of Gnosticism
– Christianity was in opposition to Gnosticism
– The figure ‘Jesus of Nazareth’ is late but was transposed into an earlier time
– The century between the invented ‘Jesus’ and the Church Fathers (c. 50–150 CE) was filled in with ‘ladders of authenticity.’ 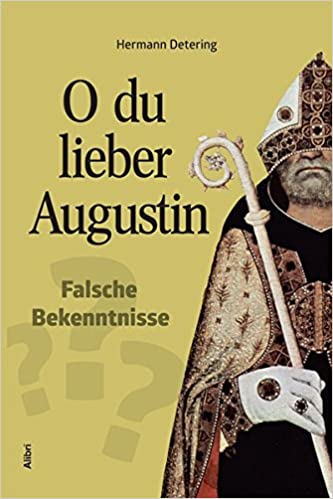 These four essential points relating to Christian origins were hidden long ago and many centuries of evidentiary suppression and outright forgery have ensured they stay hidden.

As I delve more and more into this question shocking examples of Christian forgery continue to come to light. They amaze me. The forgery mill that was Early Christianity did not end with the Church Fathers. In the Middle Ages texts were still being forged and retrojected back a millennium. For example, my late colleague Hermann Detering argued in one of his books that Augustine’s Confessions are a medieval forgery!

Detering’s book should be much better known. But, as with so many worthy scientific investigations into Christian history, the German monograph remains untranslated, uncited in the scholarly literature, and already quite forgotten. But what a thesis!

In the second century when Jesus of Nazareth was conceived and the canonical gospels were written, the more astute among the ancients were quite aware of the rank fiction at the heart of the “good news”:

[Jesus] constructs a ladder between earth and heaven,
He climbs it, descends, and hovers between sky and earth,
And he says, “See, I have come from on high, I am your Savior.”
But don’t believe it, for the ladder is adorned with lies, magic, and illusion.
[Ginza Right—Lidzbarski p. 49]

Who today reads the Right Ginza? Who today has even heard of Mandaism, a gnostic movement that goes back to pre-Catholic times? This is no coincidence. The Church has succeeded by aweing, forging, suppressing, marginalizing, destroying, and even forcing conversions under penalty of torture and death.

And that is a story that needs to be told.