For the last couple of years I have refrained from commenting on Prof. Ken Dark’s 2020 book, The Sisters of Nazareth Convent: A Roman-period, Byzantine, and Crusader site in central Nazareth. Already in 2006 Dark wrote that his goal in examining the Sisters of Nazareth site over several summers was to produce “a book-length report—fully illustrated with detailed scale drawings and photographs—covering all of the data.” I have already extensively rebutted Dark’s claims of a first century dwelling on the site, both in my book NazarethGate (Chapter 6) and also online (academia.edu).

The Sisters of Nazareth Convent is located about 100m west of the Church of the Annunciation. No one (not even Dark) contests the presence of a Roman-era tomb complex there—one complete with a rolling stone that has been a tourist attraction for the past century. Wisely, Dark did not choose a photo of the massive rolling stone for his book cover. Given his astonishing claim that a dwelling was at this site prior to the tomb, I can understand why. 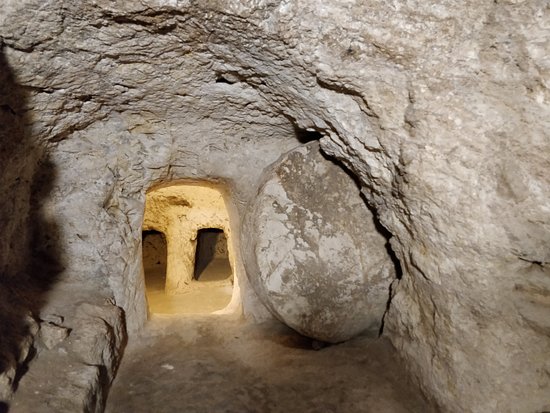 The underground tomb entrance at the Sisters of Nazareth Convent site. According to Prof. Dark, this was a dwelling at the turn of the era. Note the massive rolling stone still in perfect condition. Two kokhim (burial niches) are visible through the tomb entrance. (NazarethGate p. 93) 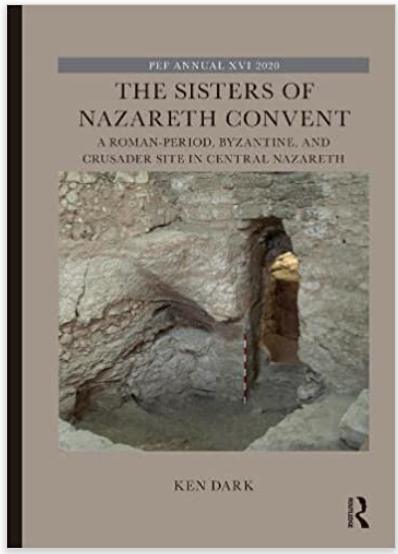 Tombs, of course, were/are underground. Dwellings were above ground. Thus, a tomb and a dwelling could theoretically coexist at the same site, particularly if the tomb were hewn after the dwelling was abandoned or destroyed. In a Jewish context, tombs and dwellings are mutually exclusive, for Jews cannot live in proximity to tombs (the dead are a source of ritual impurity—Num 19:11). This is why the Mischna (m. Bava Bathra 2.9) mandates that tombs be outside the settlement proper and even stipulates a minimum distance (“fifty ells”) between the nearest dwelling and a tomb. This fits the Nazareth evidence perfectly, for an extensive cemetery was situated on the Nebi Sa’in hillside (where the Christian tradition has always located the village “of Jesus”), while the Middle Roman village of Nazareth (beginning ca. 100 CE) was, quite reasonably, located a couple of hundred meters away on the valley floor, with further tombs outside the village to the east. 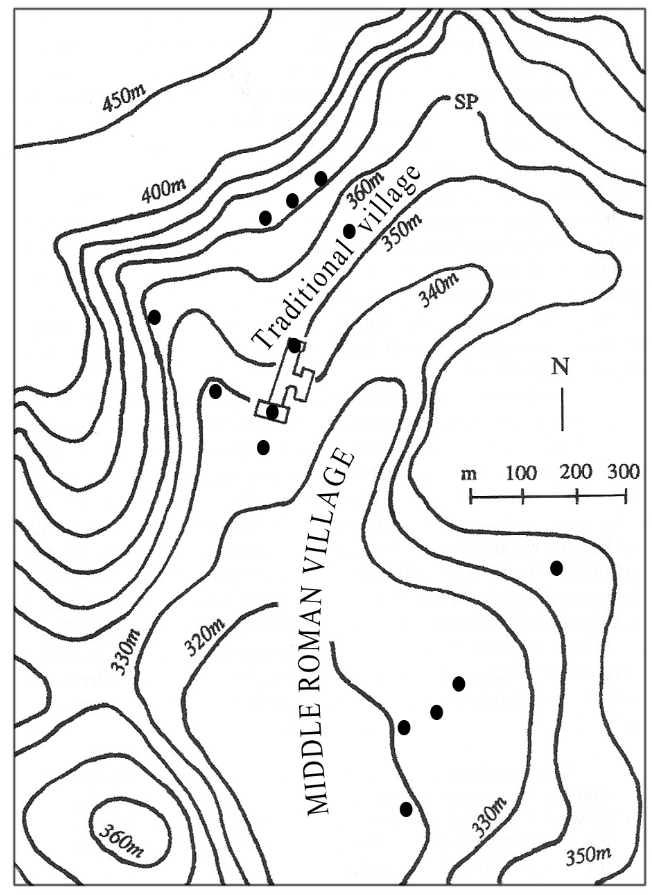 Tombs of Middle–Late Roman times (black dots) at Nazareth show that the ancient Jewish village was on the valley floor (where one would expect it) and between two cemeteries, not on the northern hillside where the tradition has long located it. (NazarethGate, Fig. 1.4.)

I know of no archeologist who, other than Dark, has proposed that Jews constructed tombs under abandoned former dwellings. It is an unusual concept at the very least. In any case, Dark proposes that a Nazarene family dwelled on the site before the tomb was hewn, yet he identifies some of the rock-hewn walls and underground funereal features (e.g. the “Chambre Obscure”) as elements of an ancient dwelling, and the photo on the cover of Dark’s book shows what appears to be a rock-hewn doorway—but was in fact the underground connection between two burial chambers. It all makes little sense chronologically, archeologically, or even logically. Yet Dark persists, and now has produced a whole book published by Routledge! Unfortunately, this is symptomatic of the very sorry state of New Testament archeology today.

I am not the only one to wonder about Dark’s unusual claims. The Israeli archeological establishment (including Yardenna Alexandre) has, over the years, steadfastly kept its distance from the archeologist’s work in Nazareth. As far as I know, Dark never secured a permit from the Israeli government to dig at the Sisters of Nazareth Convent site and has never excavated there himself. His indefensible interpretation of the site’s remains is necessarily based upon the finds of others (including, for example, Bellarmino Bagatti) who, however, never concluded anything like a domestic installation at this site.

Chapter 9 of Dark’s book is provocatively entitled: “Is this the house of Jesus?” Of course, the suggestion galvanized the international press (with the help, I suspect, of some top-flight publicists). CBS wrote: “Is this house under a convent in Nazareth the boyhood home of Jesus?” Predictably, the Biblical Archaeological Review jumped on the story already some years ago: “Has Jesus’ Nazareth House Been Found?” (BAR, March/April 2015).

Dark joins a growing crowd. Ever since Père Viaud in the late nineteenth century everybody who has dug at Nazareth seems mesmerized with demonstrating some connection to Jesus. So, today we have dueling Jesus proposals only meters away from one another on the ground: Yardenna Alexandre (a far more informed archeologist than Dark as to Galilean remains) claims to have uncovered a “house from the time of Jesus.” (In fact, it was a wine making complex dating to Middle-Late Roman times—NazarethGate, Chp. 10).

In his apparent attempts to (a) link the material remains to the turn of the era and (b) characterize them as ‘domestic,’ Dark long ago got himself into a ferocious muddle at the Sisters of Nazareth Convent site. I wrote in my book:

This confluence of events within such a short span of time is, frankly, impossible. The logic behind Dark’s reasoning seems to be: (a) Since the site had to be inhabited ‘at the time of Jesus,’ then the dwelling in turn needed to be abandoned not long after the turn of the era. (b) One way to date the destruction of the dwelling is to propose the hewing of a tomb onsite. (c) To preclude the possibility that the tomb was hewn much later (thus weakening Dark’s argument) the tomb itself also needed to an end fairly quickly, i.e., by ca. 100 CE.

This is agenda-driven archeology—precisely what so many pundits continually inveigh against.

Dark does not claim that Jesus was born in a tomb, nor that the Holy Family lived in a tomb. His claim is only slightly more nuanced: the house was first, and the tomb was constructed later. Dark even extrapolates a similar dwelling-tomb sequence to other sites in Nazareth. To my knowledge his novel view has gained no peer support. I believe Dark is the first, and the only, archeologist to propose that tombs were hewn under abandoned Jewish dwellings in Roman times.

As mentioned above, Y. Alexandre (who works for the Israel Antiquities Authority) has also trumpeted claims of a house from the time of Jesus. Thus, both Dark and Alexandre appear to be stealing one another’s thunder.

Not long ago I came across an interview that Ms. Alexandre gave. The audio is online here. I emailed the archeologist with some remarks but received no reply. The content of my email follows:

This evening I listened with pleasure to your interview of July 2020, “What do we know about Nazareth in Jesus’ time?” It took me a whole year and a half to learn of this podcast—not so bad, actually! Now, here are a few comments, made with all due respect to you…

I’m very pleased to learn that stone vessels continued in use (in production?) into III CE. This tells us that the (few) stone vessel fragments from Nazareth cannot be used as evidence for a town “at the time of Jesus,” i.e., at the turn of the era. They continued in production/use long after…

I note that you avoid mentioning (kokhim) tombs on the hillside… That is, of course, a big problem for you and others who suppose there was a village on the hillside in Roman times.

You also mention “Herodian” lamps: Well, even if those from the Nazareth basin were manufactured in Jerusalem, they still date after the turn of the era (cf. Varda Sussman’s dating of lamps). This does not help to establish a village at Nazareth at the turn of the era. All these “Herodian” lamps date to CE times–as late as 135 CE (see my first book, “The Myth of Nazareth,” p. 172).

You affirm in the podcast that “Priests moved up to Galilee from Jerusalem before 70 CE.” But please see Dalia Trifon (Tarbits 1989-90:pp. 77-93) and my discussion at “The Myth of Nazareth” p.277. In short, no northward exodus of priests from Jerusalem took place before the Bar Kochba Revolt. In fact, after 70 CE, priests in Jerusalem still hoped for a revival of the city.

At the end of the podcast you speak of “doubters” and “a specific person who’s been writing this.” Such a “specific person” would, I suppose, be me. You say: “There’s really no reason to move Nazareth out of Nazareth to another place. No reason at all. I’ve actually communicated with a specific person who’s been writing this. I hope he’ll be convinced by my finds.” But, Ms. Alexandre, I never wrote such a thing. Rather, I claim that “Bronze-Iron Age Yafia was where present Nazareth is.” There’s a a very different proposition—one supported by the evidence.

The tomb under the Legacy Hotel that you excavated was not part of “Nazareth,” but was part of Bronze-Iron Age Yafia, which was obviously a big town—big enough to be mentioned in Egyptian records. That early Yafia (in the Nazareth basin) was destroyed by the Assyrians in VIII BCE. Many centuries later Yafia was refounded 3 Km west of the center of present day Nazareth. That was the site of Yafia known to Josephus.

I’m wondering if you plan on retiring soon from the IAA? After that, the two of us might be able to communicate more freely… That would be nice!

With esteem for your overall fine work in archaeology, and with best regards from the U.S.A.,

I am yours cordially,