4. Manuscripts recovered from the Cairo geniza
Among the numerous Hebrew and Aramaic manuscripts discovered in the nineteenth century in a Cairo geniza, some liturgical poems were also found, piyyoutim containing references to priestly families, with explanatory marginal notes in Hebrew. Here is a translation of the pertinent verses from the eleventh century concerning the four priestly classes which we also encounter in the Caesarea inscription: 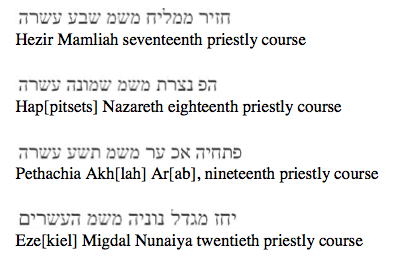 Klein’s conclusions and the Caesarea inscription

In 1939 Samuel Klein published a book in Hebrew entitled Sefer ha-Yishouv. On the basis of the various texts noted above, he attempted the theoretical reconstruction of the ancient synagogal inscriptions with their priestly classes and places of residence. Here, then, is the reconstruction of the four verses according to Klein:

Thus, Klein’s reconstruction of the pertinent four lines in Hebrew is as follows:

The key to the understanding of the inscription is to be found in fragment 1 [= Fragment A]. If we compare the text with the list of the priestly courses, as established theoretically by Prof. Klein—together with their appellations and the names of the villages in which they lived in Galilee—the identity is astonishing. [Vardaman and Garrett, The Teacher’s Yoke, p. 47]

Thus, the Caesarea inscription, fragment A, discovered in 1962 apparently irrefutably demonstrates the correctness of Samuel Klein’s reconstruction, and implies the existence of a Galilean village with the name Natsareth at least from the second half of the second century CE. 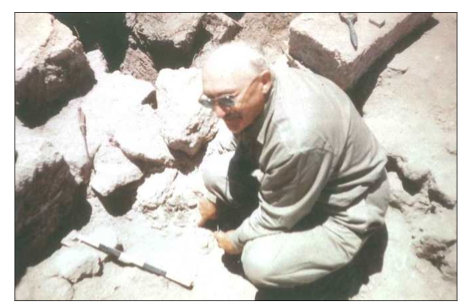 It is superfluous to emphasize the importance of this evidence regarding the existence of Nazareth, a question which has been much debated by specialists and which (as we saw in the citation from Guignebert) constitutes a “pebble in the shoe” of the tradition. Nevertheless, without other proofs, the work of Klein remained little more than a misunderstood hypothesis.
But on August 14, 1962, everything changed. On that day a marble fragment in Caesarea was discovered which mentions N-Ts-R-Th (Nazareth). It appeared to be a fragment of one of those lists of priestly courses about which Klein had written so much.
Klein’s conjectural reconstruction of the priestly classes (above), theoretically established on the basis of clues, was revealed to be absolutely exact, at least for the letters on the fragment A found in Caesarea.
To understand the uniqueness of this coincidence, it is sufficient to compare Avi-Yonah’s reconstruction (Fig. 3) with the another inscription of the priestly courses discovered in the Yemeni town of Bayt al-Hadir in the early 70s (cf. C. Robin, Himyar et Israel, 2004). The differences are many and, sometimes, substantial. On the other hand, between the Caesarea inscription and the theoretical reconstruction by Klein, the identity is amazing. So amazing that it must arouse suspicion.