Vardaman and the microletters
Jerry Vardaman, who passed away in November 2000, was a respected archaeologist for many years. However, his reputation today is indelibly sullied by a most remarkable affair which has nothing to do with Nazareth but, rather, which concerns the date of Jesus’ birth.
Apparent errors and contradictions in the canonical birth stories have produced more than one enigma relating to the birth of Jesus. Scholars have long been aware that the Gospel of Luke (2:2) places the birth subsequent to a census by Quirinus, a census which historians tell us took place in 6 CE. On the other hand, the Gospel of Matthew (2:1) has Jesus born while Herod the Great is still alive. Herod died in 4 BCE, and thus a chronological conflict exists between these two accounts.
Jerry Vardaman hypothesized that Jesus was born in 12 BCE, after a prior census effected by the same Quirinus. Though this thesis was not his invention, Vardaman offered the scholarly community “proofs” that were extraordinary in the extreme. As Richard R. Racy relates:

Unfortunately, there have been attempts by modern apologists to defend Luke’s account and reconcile the two that have crossed over from even sincere amateurishness to outright foolishness and fraud. Probably the worst of these is the case of the coins of Vardaman. Dr. E. Jerry Vardaman was a respected scholar and archaeologist, an expert in New Testament chronology, author of six books or dissertations and many other academic articles, and a lecturer. He was an ordained Baptist minister with a Th. D from Southwestern Baptist Theological Seminary and a Ph.D from Baylor University. He was a field archaeologist in more than half a dozen biblical sites, a professor of religion at Tarleton state College in Stephenville, Texas, and an instructor at two Baptist seminaries teaching biblical archaeology before he became the founding director of the Cobb Institute of Archaeology at Mississipi State University in 1973 where he served also as Professor of Religion until his retirement in 1994. He died in November 2000 still active as a speaker on biblical archaeology. 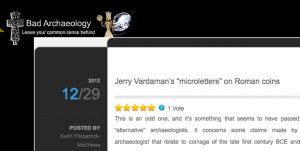 A discussion of Vardaman’s microletters from the online blog Bad Archaeology.

With such an impressive set of credentials, we would expect exacting care and full evidence for any claims he made regarding any biblical controversy. Whatever else he ma have done well, his contribution to this issue of the conflict between Matthew’s and Luke’s accounts stands out as stark delusional nonsense. Vardaman claimed that he and another scholar, Nikos Kokkinos, discovered certain ancient Roman bronze coins in the British Museum that were covered with what he called ‘microletters’; or ‘micrographic letters’; letters supposedly hand-inscribed into either the coin itself or the mold from which it was made that are so small that they can only be read with a magnifying glass. According to Vardaman, the letters refer to Jesus by several of His biblical titles such as ‘King of the Jews’, ‘Messiah’, ‘Righteous One’, etc. By using ‘microletters’ dates of AD 16, which contradict the date on the coin, LHKT DAMASKWN or ‘328th year of the Damascenes’ in English and which he never explained how he arrived at, he concluded that Jesus was born in 12 BC and goes on from there to generate a New Testament chronology all the way to the conversion of Paul. Vardaman even claimed to have found other microletters on stone monuments, but the stone monuments of that era were never polished, so the rough surfaces would never have received such micro lettering to begin with.

The defectiveness of these outrageous claims are too numerous to list here, but a few will make the point. First, the coins exist in the British Museum and have no such markings. Second, such tiny lettering (about 1/50 of an inch high as Vardaman represented them in his drawings and on coins smaller than a quarter) would have been impossible in the first century because the technology to have inscribed them didn’t exist until the late Industrial Age, maybe the 1700’s. Third, the coins are so worn that the original bold image has lost all its detail, so such tiny lettering would have disappeared centuries ago. Fourth, the letters are all in Latin but appear on a coin cast in an area of the world that only used Greek letters, and Vardaman also sees such Latin letters as ‘J’ and ‘W’ that were non-existent in ancient Latin and did not appear in Latin until the Middle Ages. Further without going into detail, he even misinterprets the dates in a way that contradicts himself. Vardaman never produced any hard evidence for his claims, never invited technical examination of the coins, only produced drawings (not even a photograph) and never published a paper on them, but only expounded on them in lectures—mostly in China to a seminary. We can only imagine that a man of such respected scholarly achievements in his previous history must have succumbed to the temptation to produce some startling evidence to prove his academic position and simultaneously provide confirmation of the basic tenets of his faith, an act of frustrated desperation, like that of a preacher who so desperately wants people to believe in divine healing that he has people lie about their healings to get others to believe. [R. Racy, Nativity: The Christmas Story, Which You Have Never Heard Before, Bloomington, 2007.]

A Catholic assessment sympathetic to Vardaman’s thesis regarding the microletters.

On one of the first century coins, Vardaman proposed to find the following inscription incised in microletters: “First year of Jesus of Nazareth in Galilee.” [Vardaman, J., Chronos Kairos Christos I, Winona Lake, 1989:72.] Of course, this alone supplies all proof required for the existence of Nazareth in the first century!
Furthermore, Vardaman claimed to have found a microinscription on a funeral stone known as the Lapis Venetus. He concluded that the inscription showed beyond any doubt that Quirinus conducted a census in the year 12 BCE. On May 18, 2000, Vardaman sent an email on this subject to Ronald L. Conte Jr.:

The microletters (but these are clear and definite as far as I am concerned) LA CONS P.S.QVIRINI are on the line referring to the census which A. Secundus took of Apamea, being sent by Quirinius for that purpose on the Lapis Venetus (Inscription of Venice – still there in Arch. Museum). Quirinius was only consul one time—in 12 B.C. For some it will be a problem since here Greek is mixed with Latin, but such critics will have to blame the original writer of the microletters—I am confident of my reading […] I believe that the Lapis Tiburtinus is also connected with Quirinius, contra almost all modern scholars. Is my “Yes” better than their “No?” [Notes on the Unpublished Research of Dr. E. J. Vardaman.]

Until his death only a few months after this email was sent, Vardaman never admitted the fraud of the microinscriptions. Our present concern is that this was not the only secret which he took to the grave.
To what lengths did Vardaman go in order to substantiate his thesis regarding the birthdate of Jesus? Answer: He invented archaeological artefacts—the microinscriptions. What was necessary for him to validate, in an irrefutable manner, the ‘ancient’ existence of Nazareth? Answer: He ‘discovered’ a small piece of stone containing the word “Nazareth” apparently confirming the thesis of Samuel Klein relative to the list of priestly families.

… an act of frustrated desperation, like that of a preacher who so desperately wants people to believe in divine healing that he has people lie about their healings to get others to believe.

For these reasons we believe that the Caesarea inscription is the illegitimate offspring of the ha-Kalir’s Lamentation, and that its real father is Jerry Vardaman.

NEXT: New upublished evidence regarding the Caesarea inscription