The first half of the second century was a watershed time in Christian history. By mid-century all four canonical gospels had been written (below), and the bulk of the Pauline epistles were ‘collected’ and published. At the beginning of the second century, however, it seems that only some elements of Paul’s letters (short epistles) were known, and probably not to many people. 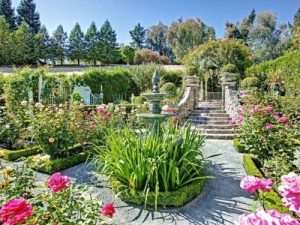 It is difficult for us to imagine a Christianity without Jesus of Nazareth. But we must do so, for the colossal God-man arrived not before the second century. The Pauline epistles do not know such a Jesus. On the other hand, the gospels do.

The period of greatest ferment in Christianity can be dated to the two centuries c. 125 CE–c. 325 CE. Before 125 CE there were no ‘Church Fathers,’ and many Christian texts that have been claimed for that early period (from the letters of Ignatius to the canonical gospels) are spurious, being later creations of the church. On the other hand, the Christian texts that survive from that early period (the Didache, Odes of Solomon, Gospel of Thomas) know Jesus, but not Jesus of Nazareth.

All the evidence suggests that earliest Christianity was a chaotic time, with a plethora of religious groups and beliefs. Today Christianity, despite all of its sects, is like a manicured French garden—there are indeed many paths, but they are tended and clear of debris, the hedges are trimmed and straight, the weeds have been pulled… Early Christianity, however, was a state of complete wildness. No gardener existed. No paths. Wild animals roamed freely. 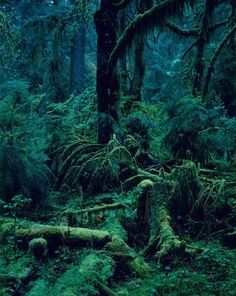 Beginning in the second century, pruning the unruly garden of belief begins. The ante-Nicene Church Fathers brought everything into conformity with their new savior, Jesus of Nazareth. The catholic tradition rehabilitated and incorporated (‘co-opted’) the Pauline epistles, purging them of the most obvious elements of an earlier Jesus-as-spirit christology (but, interestingly, failing to update them with information regarding Jesus of Nazareth—perhaps it was too late). As for the large mass of Christian ‘apocrypha,’ those works would be expelled into the expanding deserts of ‘heresy’ and eventually consigned to the fire. And one more thing: during that whole process—between c. 125 and 325 CE, the Church Fathers assiduously constructed a false history (under continual revision and refinement) to make it appear that the latecomer Jesus of Nazareth was original:

• “Paul” (though early) was made into a very late follower of the savior
—he even joined the movement after the death of Jesus;
• heresy was routinely deemed “later” and orthodoxy “earlier”; and
• an authoritative lineage back to the twelve canonical (and invented) “apostles”

was forged in various church “histories”.

It is possible to suggest three general stages of christological development—Jesus as gnosis, Jesus as prophet, and Jesus as Son of God:

The above is only a working hypothesis, of course. It is how I personally view the development of early Christianity—the evolution from a religion teaching the acquisition of gnosis to one teaching faith in a divine being. According to the above, the earliest Christian gospel known to us would almost certainly be the Gospel of Thomas. In that gospel, after all, Jesus is little more than the voice of the immaterial gnosis. GTh offers no biographical information, and one can suppose that the Gnosis itself spoke: “Jesus said…” 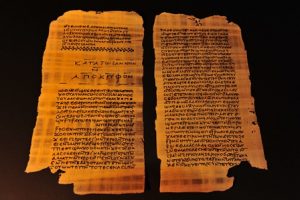 Yet, even the Gospel of Thomas attaches some human attributes to Jesus. In L28 Jesus says “in the flesh I manifested myself to them.” In L61, Jesus comes up on Salome’s couch and eats at her table. Thus, Jesus is both spritual entity and human being—a “spirit imbued prophet” as we see in Stage 2 above. Quite aware of this fusion of elements, the unknown author/compiler of GTh makes a critical distinction between the human and the spiritual ‘sides’ of Jesus. In L52 where his disciples say that the prophets spoke of “him,” Jesus responds in a way that separates the “one living” (the spiritual gnosis) from that which dies (the fleshly body). In L99, the brethren of Jesus are not of the flesh at all (cf. Mk 3:32–35). The gnosis that Jesus gives is profoundly immaterial (LL 15, 17). The christology conveyed by GTh is generally that of the spirit Jesus speaking through the human prophet.

Thus, the Gospel of Thomas belongs to an early ‘spiritual Jesus’ stratum of Christianity. In fact, we can locate it between Stage 1 and Stage 2 above. In Stage 2, Jesus is no longer primarily the disembodied gnosis—he now has a biography, with narrative elements framing many sayings. Jesus is now a distinct personality. In this stage the notion “Jesus” is potent yet nebulous: the voice of gnosis with anonymous human attributes… This was a new being in the western world. The dual nature of Jesus invited much confusion, for one could speak of Jesus as spirit (gnosis) or Jesus as man (the prophet uttering the gnosis). The critical concept, though, is fairly simple: the spirit Jesus and the human Jesus were simply two sides of a spirit-imbued prophet. Anyone could be a Jesus if s/he were imbued with the spirit. It was not enough to simply look at someone, or even to talk to him/her—for the gardener, the fellow traveler on the road, or the vendor of vegetables could be a ‘Jesus.’ The apocryphal Christian texts show that this conception persisted well into the second century, until it was pushed into oblivion by the ‘one and only Jesus,’ that is, by the arrival of the colossal figure, Jesus the Nazarene (c. 125 CE). 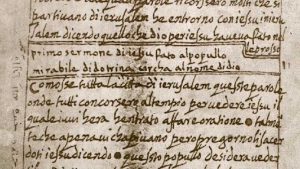 The Gospel of the Hebrews (of which very little survives) and the lengthy Gospel of Barnabas reflect Stage 2. In them, Jesus interacts with others as does a man. Yet these two gospels carefully maintain a clear distinction between the spirit and the man. It is the spirit element that heals, saves, and is divine. The human element can do nothing on its own. The Gospel of Barnabas is especially emphatic in this regard. It repeatedly reminds the reader that Jesus is not God, that Jesus is a human being like you and me. Unlike us, however, the Jesus of GHeb and GBar knows how to pray to God, how to engage God’s divine power, how to transmit the life-saving gnosis, how to effect remarkable healings, and how even to raise people from the dead. The Church would build on this view (Stage 3), making Jesus of Nazareth the exclusive embodiment of God—indeed, transforming him into God on earth.

The christological transition from Stage 2 to Stage 3 was apparently effected in the second quarter of the second century. The ‘logos christology’ sometimes encountered in scholarship describes this period of transition. A. Klijn notes four works that he associates with early Egyptian Christianity, all of which equate ‘Jesus’ with the logos: the Epistula Apostolorum, the Sibylline Oracles, the Testimony of Truth, and the Apocalypse of Peter. A tension exists in these works regarding the nature of Jesus: spirit or flesh? Jesus is still the gnosis, the revealer of secret knowledge that takes away ignorance (incidentally, this is very Buddhist). The Gospel of Thomas also comes to mind in this regard: “Jesus said…” (not “Jesus did…”). As Klijn says, “The knowledge gives life to those who accept Jesus’ teaching… The Logos itself remains unaffected by the flesh.” In other words, it is the teaching that saves, not faith in the divinity of Jesus. But this was about to change as Gnosticism gave way to Catholicism.

The next step was the divinizing of the man who possessed the Logos. Unsatisfied with purely spiritual transformation, ordinary people imagined that the Logos/gnosis imparts the ability to effect miracles. And so (even in the aforementioned works) we encounter Jesus’ healings, his exorcism, his walking on water, and his feeding of the multitude. This is because people supposed that the Logos imparts the ability to act as God even in the flesh. All this is arguably before the Gospel of Mark, a work now not long in the future.

As regards the creation of the synoptic gospels, M. Vinzent writes:

From the reports about Marcion we gain as terminus ante quem for the creation of our Synoptic Gospels (and a first stage of John) the years between 138 and 144 AD… Further stages of John may have followed very soon… If Justin knew of John, then this text must have been finished before 151 AD.
[M. Vinzent, Marcion and the Dating of the Synoptic Gospels. Leuven: Peeters 2014, p. 139.]

A terminus ante quem of 138–44 CE means that all these gospels were composed before then. On p. 138 of the above-cited book, Vinzent writes that Marcion “published” his Gospel in Rome in the summer of 144 CE, but that an earlier draft of his gospel dates before that time. Even earlier may have been the Gospel of Peter.

[NOTE: In a series of posts beginning here, it is argued that Marcion’s “gospel” was not a text at all. It was a doctrine, theology. This redefinition of Marcion’s “gospel” does not affect dating so much as the stemma of gospel formation, discussed elsewhere. In other words, Marcion’s gospel was neither a textual “mutilation” of the Gospel of Luke nor a textual predecessor of the canonical gospels. In fact, it is my contention that a textual gospel of Marcion never existed.—R.S.]

The Pauline epistles do not yet know the gospels. They do not know Jesus the Nazarene/of Nazareth. They clearly represent Stage 2 above. They know a cosmic-spiritual Jesus, and in Paul’s eyes we should all be possessed by Jesus and should all go up the “the third heaven” as he did (2 Cor 12:2). But when we go up to heaven it is not in the flesh. 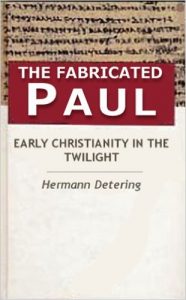 It is important at this point to emphasize the contrast between Stage 2 and Stage 3, between the Pauline view and the view soon to appear in the gospels. Though the Church later harmonized these christologies, they are completely opposite. We see this in the contrary views regarding the flesh. For ‘Paul,’ the flesh of Jesus was not resurrected. It was of no importance. As H. Detering writes, “[I]n 2 Corinthians Paul explicitly describes a knowledge of Christ ‘according to the flesh’ as an entirely false knowledge” (Detering 1993:114). And further: “That Christ gave up his blood to the Demiurge and his powers as a ransom was obviously not first fully formulated in words by the Marcionites, but by ‘Paul'” (ibid. p. 116). Once again, then, we have an opposition between the ‘docetic’ (Christ as spirit) view of Marcion and the view of the gospels—including the Gospel “of Marcion.”

Of course, for the Church the flesh of Jesus was indeed resurrected and is of consummate importance: Jesus became incarnate, and the doctrines of the virgin birth, of the eucharist, and of the bodily resurrection all stem from the view that Jesus was God both in spirit and in flesh.

Interestingly, in 1 Cor 15:35 f, Paul seems to already know the emergent Catholic view—and he combats it. “You foolish man…” he writes. “It is sown a physical body, it is raised a spiritual body… flesh and blood cannot inherit the kingdom of God.” We have an indication here of the two christologies in conflict. The Stage 3 christology already existed in Paul’s time—though the gospels didn’t yet exist.

Paul’s view did not survive, of course, while that of his opponents (those who argued for the resurrection of the flesh) did—and theirs became the backbone of the Catholic Church. That Paul—the onetime enemy of the Church—would become Christianity’s champion is a true lesson in the power of pen and propaganda. What happened is clear enough: the Catholics co-opted Paul’s epistles and (imperfectly) sanitized them. They then attached Paul’s Marcionite-sounding epistles to the gospels and formed the “New Testament.”