In the immediately preceding post we saw that a certain Jonathan was the founder of Christianity. The Jewish rabbis who penned the Talmud several centuries later dubbed him “Yeshu ha-Notsri” ( < Gk. Iesou Nazarene, “Jesus the Nazarene”). They did so under the influence of the Christian gospels that had by the fourth century CE become well-known. The Christian evangelists, however, knew better. Through a series of permutations that need not concern us here, they demoted the figure Jonathan (“Yahweh Gives”) to a secondary prophet, John the Baptist. The Mandeans, however, preserved the name Jonathan/John for their founding prophet. The Mandeans also retained the original sense of the word Natsarene (< natsar, “preserve, keep secret”) and called their spiritual teachers Natsuraiia (“keepers of secret gnosis”). They also, of course, retained the gnostic sense of the founder’s teaching—which was ultimately Buddhist, as we have now seen.

History records that the Samaritans had an arch-heretic—also dated by Shaharastani and others to the century before the common era—by the name of Dositheus, which is also a permutation of Jonathan (both names meaning “God Gives”). The Samaritans would reject the gnostic Dositheus as vehemently as the Christians would reject the Buddhism of Yeshu. In both cases reactionary religions evolved from which the original gnostic essence was ejected and replaced by faith. The trajectory gnosis → faith is historically universal, for priesthoods (once constituted) require the faith of adherents to survive and thrive, while gnosis—though it leads to individual salvation (which is, after all, the only salvation that counts)—is an internal, granular, anti-corporate, and entirely destructive force to any church. 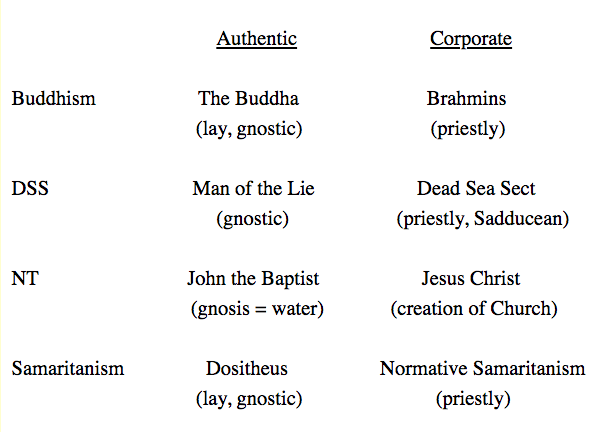 A casual remark by the ancient Jewish historian Josephus reveals that Yeshu’s sister (name unknown) was the daughter-in-law of Queen Salome. She married Aristobulus II, who would become king in 67 BCE, that is, towards the very end of Yeshu’s life.

It was after the death of Janneus that Yeshu returned from his Egyptian exile. This was either in 76 BCE (the year Janneus died), or shortly thereafter. Clearly, his close relationship to royalty provided Yeshu with extraordinarily powerful protection. We now understand the pregnant Talmudic statement: “for he was connected to royalty” (see NazarethGate p. 425). This statement was not mere hyperbole. It was meant literally.

In the outrageously corrupt, power-hungry dynamics of Hasmonean succession, anyone related to the crown was suspect in the eyes of everyone else. Thus, when he briefly held power in 103 BCE, Aristobulus I took the opportunity to kill his brother Antigonus I—thus eliminating one possible claimant to the throne. More relevantly, after Yeshu returned to Palestine in the 70s BCE, his two cousins Aristobulus II and Hyrcanus II were embroiled in a bitter feud over which one would succeed their mother Salome upon her death.

That feud eventually led to open civil war after the queen died in 67 BCE. But even while she was alive, there would have been suspicious glances cast on this son of Absalom—himself close to the royal family and perhaps also a pretender to power.

The theme of Yeshu’s royalty—or possible pretensions to royalty—survives in all four canonical gospels: “Are you the king of the Jews?” asks Pilate of Jesus.

Let us, for a moment, imagine the contemporary situation after Yeshu ha-Notsri had returned to Palestine ca. 75 BCE. The evidence (from the Talmud, etc) tells us that Yeshu had great success among the people, preaching a new, very un-Jewish religion. He was excommunicated for apostasy, inciting the people, making himself god, etc. etc. Let us put aside for the moment that (as a Buddhist) Yeshu was a very rare bird—a pacifist, one who taught “love your enemies,” one who would never take up the sword, and one who was personally thoroughly harmless.

As I mentioned, let us put all this aside and consider, for a moment, the attitude of his many followers. There surely would have been no paucity of zealots among them, zealots who would have said: “Look, your sister is the Queen’s daughter-in-law. Two of your uncles were king and High Priest. Make yourself king!” And furthermore, some would have enthusiastically offered: “We will help you become king!” In the Gospel of Mark, Pilate asks: “Then what shall I do with the man whom you call the King of the Jews?”

After all, this is only human nature. The authentic facts of history confirm the zealot strain that we find in the gospels: Peter is charged with cutting off the ear of the High Priest’s slave Malchus (Jn 18:10 etc), and one of the apostles is named Simon “the Zealot” (Mt 10:4). The Zealots, of course, would gather power over succeeding generations and would eventually precipitate the great revolt against Rome in 67 CE.

Being a saint, however, Yeshu would have nothing to do with violence. Thus, he not only betrayed his ancestral religion, Judaism, but he also betrayed the most enthusiastic among his followers.

Eventually, Yeshu was defenseless before his many enemies who simply arrested him, put him on trial before the Sanhedrin, and condemned him to die. Even his aunt by marriage, Queen Salome, would not have been able to prevent this—and she, herself, had become one of his disciples.