I wrote the essay entitled The Natsarene and Hidden Gnosis in 2011, to be read in conjunction with Ditlef Nielsen’s groundbreaking and long forgotten book The Old Arabian Moon Religion and the Mosaic Tradition (1904). This essay was originally conceived as an addendum to Chapter Four of Nielsen’s work. I am now revising and updating it in this series of posts, in order to make the essay available in the search features of this website and also in order to bring it once again to the attention of readers. The original essay is available complete in PDF form here. The first five chapters of Nielsen’s book (in my translation from the German) are available in a series of PDF’s here. To get the most out of this essay, the reader is urged to also read Nielsen’s writing.

Nielsen explores a number of still novel themes which are foundational to the origins of Christianity, such as: the influence of North Arabian religion on early Israelite origins, and in turn on Christianity; the gnostic nature of the religion of Midian, where Moses allegedly sojourned and learned from Jethro; and the gnostic character of the most ancient Israelite religion. These aspects of the pre-history of Christianity are usually shunned, for they lead in directions inimical to both normative Judaism and normative Christianity. Those directions can be generally labeled “pre-Christian gnosticism.” 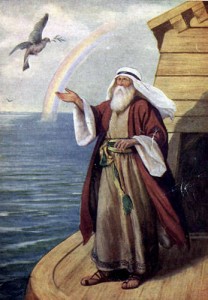 Noah or Atrahasis (“Ultra-Wise”): the rarest of all individuals who is supported by the water of gnosis

The terms “Nazarene” and “Nazoraean”—both familiar from the Christian gospels—continue to present enigmas. In this essay I show that these terms reflect the Semitic n-ts-r (nun-tsade-resh), a root with specifically gnostic connotations going back as far as the Bronze Age. The glossaries tell us that Hebrew natsar means “watch, preserve, guard.” Its cognates in related Semitic languages incorporate the meanings of “secret knowledge” and “hidden things.” Each of these interpretations, in its own right, is a potent concept in the gnostic systems of many eras. Watch / preserve / guard / secret knowledge / hidden things / were all associated with the Semitic root natsar well before 2,000 BCE when the flood story was first formulated. In other words, “the Nazarene” did not first appear with Christianity. He demonstrably goes back to “the time of Noah.”

The fact that Jesus is known as “the Nazarene” (ho nazôraios, hê nazarêne) links Christianity from its inception with the very ancient prehistory of this term and with the (generally unsuspected) gnostic thought of ancient man. It also shows us that Christianity departed from those ancient traditions and, indeed, has subsequently obliterated its own heritage. A correct understanding of Christianity must bring its ancient gnostic roots once again to light. That is the task of this essay, as well as of other writings on this website.

My 2008 book The Myth of Nazareth: The Invented Town of Jesus challenges the facile assumption that “Nazarene” in the New Testament means “from Nazareth.” It opens up another (and long repudiated) path revealing that “Natsarene” (or a close cognate, in which the “ts” transliterates the Semitic tsade) was widely used in Iron Age religion to designate the person of advanced spirituality—a spirituality linked to hidden gnosis. Hence the title of this essay: “The Natsarene and Hidden Gnosis.”

A discussion of hidden gnosis inevitably introduces unfamiliar symbols. We shall see that common terms like water, the well, the gate, the underworld, and the serpent take on unexpected meanings as metaphors, as do “places” such as Bethlehem and Ephrathah. Ancient man was much more at home in the spiritual world of gnosticism than is man today, immersed as we are in “the deep sleep of materiality.”—R.S.


The Natsarene and Hidden Gnosis

In Mesopotamian cuneiform texts of the second millennium BCE—the oldest stratum of Semitic usage—na-tsâ-ru has a wide range of meanings. It includes: (1) be watchful, alert, on guard; (2) restrain, control; (3) keep secrets; and (4) preserve, keep, observe.1 The root is n-ts-r, in Hebrew נצר (nun-tsade-resh). From this root we must also seek the derivation of the Greek ναζαρηνoς, found in the New Testament (Gospel of Mark), and also of its cognates ναζωραιoς (Gospel of Matthew), the intermediate form ναζαρα (“Q”), and finally the name of the village from which Jesus ostensibly hailed, ναζαρεθ. For a number of reasons (including the incompatibility of Greek zeta and Semitic tsade), it has generally been acknowledged that the Greek forms do not derive from the Semitic name of the village, נצרת (“Natsrath”).2

[T]hose amongst the community who possess secret knowledge are called Natsuraiia—Nazoraeans… At the same time the ignorant, or semi-ignorant laity are called ʻMandaeans,ʼ Mandaiia—ʻgnostics.’                (E. Drower, The Secret Adam. Oxford: 1960, p. IX.)

Being “watchful,” “on guard,” and spiritually “awake” are recurring themes in Near Eastern religion going back at least to Sumerian times. The Mesopotamian and Hebrew usages of natsar are comparable, with the exception that the esoteric or hidden dimension is affirmed in Mesopotamian religion but suppressed in Jewish scripture.4 This is not surprising, for secret knowledge—especially that leading to ʻgnosisʼ (manʼs apperception of the transcendent or of the divine)—has never been acceptable to normative Judaism.

Natsar is frequently encountered in Jewish scripture—often accompanied by its synonym shamar, “watch” (from whence the Samaritans, also “watchers”). These terms are ‘de-gnosticized’ by the Jewish scribes and made functions of Yahweh’s powers. Yahwehʼs actions come ʻsuddenlyʼ to those who do not ‘watch’ and are not prepared. Hence, his actions are sudden judgments and punishments upon the wicked. Yahweh appears unexpectedly (Mal 3:1) and metes out quick retribution upon his enemies (Isa 48:3; Pr 24:22). Similar unexpected retribution awaits those who oppose the will of the Israelites, Yahwehʼs servants (Jer 18:22; 49:19; 50:44; 51:8). Most frequently, however, unexpected and sudden disaster awaits those who are guilty of moral turpitude (Isa 47:11; Job 22:10; Jer 4:20, 6:26, 15:8; Pr 3:25; 6:15; 29:1; Hab 2:7).5 In these passages, the focus is not on the destructive action itself so much as on the perception of that action—the divine judgment occurs when least expected. This experiential aspect of surprise is carefully delineated in Jewish scripture:

The key here is knowledge into the ways of the divine. By implication, ignorance is itself evil and demands destruction. Thus, a detectable gnostic substratum underlies Jewish scripture, one abandoned by the later Yahwists who effectively replaced gnosis with obedience to Yahweh. A vestige of the older religion survives in the tenet that the wise person knows the ways of Yahweh. Divine action does not catch him off guard. He avoids ruin because he is watchful, and his watchfulness lends him insight unseen by his peers—gnosis. This view survives in Christianity:

“Take heed, watch; for you do not know when the time will come. It is like a man going on a journey, when he leaves home and puts his servants in charge, each with his work, and commands the doorkeeper to be on watch. Watch therefore—for you do not know when the master of the house will come, in the evening, or at midnight, or at cockcrow, or in the morning—lest he come suddenly and find you asleep. And what I say to you I say to all: Watch.” (Mk 13:33-37)

NEXT: Noah, water, and gnosis

1. In these posts, the “ts” represents the Semitic letter tsade, often transcribed as an “s” with underdot. Extensive information on Akkadian na-tsâ-ru is found in the Chicago Assyrian Dictionary (CAD) vol. 11, pp. 33 ff.

2. The traditional derivation is problematic on several counts. Linguistically, the Semitic tsade (voiceless) does not complement the Greek zeta (voiced). Hebrew tsade generally (though not always) yields Greek sigma. Literary problems also attend a derivation of Gk. ναζαρηνoς / ναζωραιoς from Heb. נצרת, e.g., Acts 24:5, where Paul is called “a ringleader of the sect of Nazoreans”—hardly understandable if “Nazorean” means the inhabitant of an otherwise unknown village. Finally, there is the weighty archaeological problem, namely, that Nazareth did not exist in the putative time of “Jesus,” that is, at the turn of the era (Salm, The Myth of Nazareth, American Atheist Pr., 2008).

5. In Jewish scripture, suddenness can also be an amoral aspect of nature (Job 5:3; Ec 9:12). Some passages speak of the speed of divine retribution, whether against the enemies of the Israelites, against the morally corrupt person, or against the one who opposes Yahweh. The Semitic root characterizing Yahwehʼs speedy retribution is most often maher (מהר)—“quickly.” Cf. Deut 4:26; 7:3–4; 9:3, 12, 16. In one passage Moses warns: “Yahweh will send upon you disaster, panic, and frustration in everything you attempt to do, until you are destroyed and perish quickly, on account of the evil of your deeds, because you have forsaken me” (Deut 28:20).